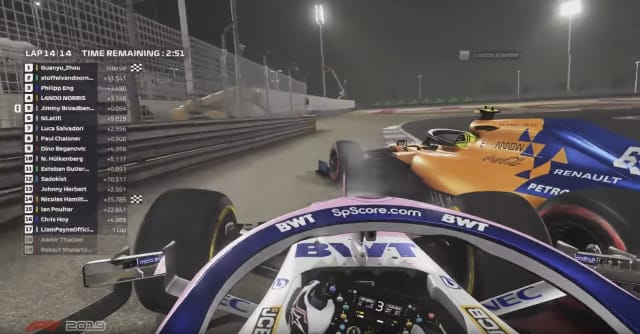 With the real motorsport world in coronavirus-enforced lockdown, online racing has seen a surge in popularity. F1 has jumped on the bandwagon to host its first Virtual Grand Prix to replace the postponed Bahrain Grand Prix.

The event saw a combination of former and existing F1 drivers, such as Nicholas Latifi and Nico Hulkenberg, take on YouTube gamers such as Jimmy Broadbent and ‘Cyanide’. Even a few celebrities such as singer Liam Payne, golfer Ian Poulter, and F1 legend Johnny Herbert got behind the ‘wheel’ for the event.

Current McLaren F1 driver Lando Norris was the big-name draw, though, bridging the gap between competitors after having amassed a huge online following for his virtual racing streams as well as his real-world exploits.

Here are some of the highlights on and off the track from a chaotic Bahrain Virtual Grand Prix.

Regular viewers of Norris’s Twitch streams will know he has technical difficulties from time to time, specifically with the F1 2019 game randomly quitting while he’s streaming. It happened during qualifying for the Virtual Grand Prix, forcing him to start last.

However, to add insult to injury, it happened again during the formation lap for the race, leaving Norris with his head in his hands and out of the race. Temporarily, at least…

With Norris starting from the back of the grid, he decided to call a few friends for advice. Fellow F1 driver Max Verstappen had some wise words, suggesting he should just turn off his computer and watch everyone else.

However, after calling various McLaren team members for strategy advice, Lando saved his best insult for good friend and fellow F1 racer George Russell, who has struggled for pace in a poor Williams F1 team. He said: “I’m starting last on the grid and I wanted to call the person with the most experience starting from the back row of the grid”.

With a wide variety of sim racing experience and abilities, a chaotic start was perhaps not surprising.

A massive incident happened before they’d even reached the first corner, with Nico Hulkenberg and Luca Salvadori bumping wheels causing the former to spear across the track, taking out Dino Beganovic in the process.

Then, a few corners down the line, Esteban Gutierrez tangled with Nicholas Latifi sending both into the wall with debris flying across the track.

Few would have expected F1 legend Johnny Herbert to be at the sharp end of the racing, but by turn two he was out in front – after qualifying 16th.

Had he simply capitalised on the chaos at the start? No, the 55-year-old had massively cut the first corner by simply driving across the grass. He received a 10-second penalty for cheating and was quickly overtaken by the leaders, ultimately finishing outside the top 10.

With Lando getting booted out of the race his car came under the control of the game’s ‘artificial intelligence’. It meant that his computer-controlled McLaren became a ‘ghost’ that other drivers couldn’t interact with, meaning it dodged all the early crashes to find itself in fourth place when Lando got back in and running.

Other racers were quick to praise Landobot, with Jimmy Broadbent noting that he’d tried to overtake but was outbraked into the corner.

Once the chaos died down and the field spread out the battles became fascinating. Former F1 drivers Gutierrez and Hulkenberg were involved in the overtake of the race, with an incredible dummy by the former that saw him sneak up the inside into turn one on lap 11.

The drivers then went toe-to-toe through the next two corners before Hulkenberg stole the spot back in the DRS zone.

The battle of the race saw YouTuber Broadbent – famous for streaming his races from a shed in his mum’s garden – go up against McLaren F1 star Norris.

In the final lap of the race, Norris caught Broadbent out into turn one with a fantastic move around the outside that looked to seal the deal. However, he lost the place in the DRS zone before cutting back once more to regain it in the following corner.

The pair then went side by side through the curves somehow avoiding contact, again going side by side into turn 10, where Norris baited Broadbent into braking too deep into the corner to take his place once more.

It all came to a head into the final corner with Broadbent attempting a move around the outside. The pair touched as Norris moved across to defend leaving the F1 star in the wall and settling for fifth.

Far out in front was Chinese racer Guanyu Zhou, who competes for Renault in Formula 2. Following early battles with GT racer Philipp Eng, Zhou had a strong race that saw him push on to a commanding win ahead of Stoffel Vandoorne in second and Eng in third.

There were high hopes for Davidson, who is a simulator test driver for the Mercedes-AMG F1 team. However, after technical difficulties saw drivers have to restart the game, the Brit missed the memo and continued the original race.