UK Drive: Hyundai Ioniq now has more range – but is that enough? 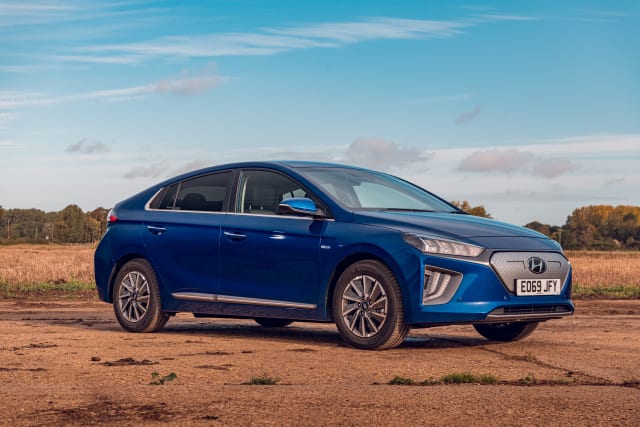 The Ioniq range has been at the forefront of Hyundai’s commitment to providing low-emission vehicles. When it was introduced, it was the first car to be offered with the choice of a hybrid, plug-in hybrid, or all-electric powertrain, with no non-electrified variant on offer.

While the firm’s electrification strategy has expanded to its mainstream models, with the Kona Electric in particular winning plaudits across the industry, the Ioniq is still going strong, receiving an update late last year. Here, we’re testing the pure electric version.

The electric model we’re testing here gets a bigger battery and more powerful motor, as well as more options for adjusting the amount of regenerative braking on offer. The hybrid powertrains have been carried over, but now get the same control over regenerative braking, which extends the potential electric-only range.

Those changes under the bonnet mean the battery size has increased by more than a third to 38.3kWh, while the more powerful electric motor makes 134bhp and 295Nm of torque. The result is an official range of 193 miles – though we typically saw about 170 miles indicated with a full charge.

While many electric vehicles impress with instant torque, the Ioniq has been tuned with efficiency in mind, meaning it feels quite lethargic off the line. However, it’s far from sluggish and has enough pace to dart through gaps in traffic and easily maintain motorway speeds.

The range will be more than enough for the average driver, too. We found we’d knocked about the same number of miles off the range indicator as the distance we’d travelled, meaning that figure isn’t an optimistic, unachievable number.

The Ioniq is a car that wants you to drive it in a calm and collected manner. Do so, and it’s a well-mannered family car that’s comfortable and relaxing to drive. It’s just as happy to sit quietly at motorway speeds as it is in inner-city traffic, too, thanks to its relatively small dimensions and good visibility.

However, some of the finer points of the driving experience are disappointing, with the brakes providing inconsistent feedback in particular. It makes slowing down unpredictable because you’re never quite sure how much force you’ll need on the pedal, resulting in the occasionally jerky stop.

The Hyundai Ioniq manages to tread a fine design line that makes it quirky and unique without looking too wacky. It looks a little awkward from the back, but particularly from the front it’s a handsome thing, with the new blocky headlights and fang-like daytime running lights.

The latest design changes work well, including a new closed-off grille for this all-electric version, redesigned front and rear bumpers, and new-look 16-inch alloy wheels. There are also four new colours, which bring the total to nine across the Ioniq range.

Inside it’s very different from before; though still unmistakably Hyundai, it feels like a real effort has been made to bring a more upmarket appeal. Its success is hit and miss.

The new 10-25-inch widescreen infotainment system, housed within a gloss black surround, is the main feature of the cabin, and while it’s responsive and intuitive to use, along with the touch buttons elsewhere on the dashboard it’s really difficult to use on the move.

The touchscreen and climate control section lacks the class and quality of a truly premium model, but elsewhere Hyundai’s done a great job of bringing quality levels up through the use of soft-touch materials.

Prices for the Electric start at £29,950 after the government’s plug-in car grant in Premium trim, which offers 16-inch alloy wheels, a leather-wrapped steering wheel, heated front seats, and cloth upholstery. It also includes all of the on-board technology, such as the 10.25-inch touchscreen, LCD screen in the instrument binnacle, wireless charging pad, and Android Auto and Apple CarPlay connectivity.

Step up to Premium SE for £31,950 after the grant, and additional equipment includes ventilated and electrically adjustable driver’s seat, heated rear seats, and leather seat upholstery.

While many electric vehicles play on rapid acceleration or futuristic styling inside and out to woo buyers across from traditionally fuelled vehicles, Hyundai’s approach is much more mundane – this is an ordinary-looking car that’s perfectly good if exceedingly dull to drive, while being spacious and practical inside. And that’s where its appeal lies.

There are plenty more rivals entering the segment this year that will make the Ioniq a tougher sell, but for those who want a car to be nothing more than a car, the Ioniq hits the spot.