UK drive: The Renault Clio returns better than ever 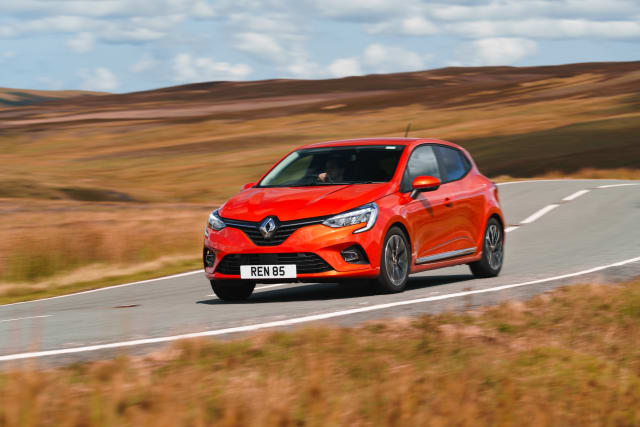 While the Nissan Jukes and Ford Ecosports of this world might be slicing into the sales of conventional superminis, there is still a big market for these affordable compact models.

The Fiesta remains Ford’s best-seller in the UK; the Corsa as Vauxhall’s, and for Renault it’s the Clio. It’s been a huge success story, and despite the presence of the firm’s similarly-sized Captur crossover, it’s done little to detract sales from this hatch. The opposite, in fact.

With 15 million sold since it was launched 30 years ago, as well as being the European class-leader for sales since 2013, this remains a mightily important car for Renault.

The last model looked the part, but wasn’t especially good to drive and had a sub-par interior come the end of its lifetime, so can this fifth-generation Clio sort that?

If you just look at this new Clio, you could be mistaken for thinking it’s little more than a mild facelift. Renault hasn’t changed the styling dramatically, and is happy to admit it. The old one still looked great, and apparently that’s why most buyers choose the Clio anyway.

So, the differences. Well, key to this new model is its new CMF-B platform, which allows it to be more spacious than ever, as well as being available with a hybrid powertrain for the first time – it’s arriving in the summer.

Another big change is on the interior, which feels far more upmarket than before, while top-spec versions feature a large 9.3-inch touchscreen, as well as the option for a 10-inch digital instrument cluster.

Buyers have plenty of engine choice with the Clio, with petrol and diesel engine options ranging in power from 74bhp to 128bhp.

But our test car features the mid-range option – a turbocharged 1.0-litre producing 99bhp and 160Nm of torque. It’s not what you’d call quick, and it’s a shame that the turbo doesn’t deliver a bit more zing (like it does in Ford’s EcoBoost-powered models, for example), with 0-60mph taking 11.6 seconds, while maxed-out Renault says it would hit 116mph. Power is delivered to the front wheels via a five-speed manual gearbox, which is pleasant enough, but let down by an overly chunky gear knob.

On the plus side, it’s very efficient, claiming to do 54.3mpg, which is easily achievable, along with CO2 emissions of 99g/km.

A Fiesta or Mini remains a more obvious choice if you’re wanting the best supermini to drive, but whether you’re looking for a town runabout or something for small motorway commutes, the Clio is a great all-rounder.

Our test car’s small 16-inch alloy wheels equate to a comfortable ride, while the Clio is also easy to place through corners with minimal body roll. We might usually complain about the Clio’s rather light steering, but as it will predominantly be a town car, it’s really a good thing as it makes it exceptionally easy to manoeuvre. One of the only things we’d like to see is a six-speed manual, which would just help to drop the revs at motorway speeds and lead to an overall more relaxed drive.

With styling being something Renault absolutely excels at, it’s not surprising that Renault hasn’t really done anything radical here.

The new Clio is arguably more noticeable than before thanks to its C-shaped LED daytime running lights, while LED headlights are fitted as standard, which is something uncommon at this price point.

Just like before, Renault has tried the ‘make a five-door car look like it has three’ look with the integrated rear door handles, while the same compact profile remains. A sportier-looking R.S. Line grade serves those wanting something a bit more aggressive, too.

So it’s the interior where Renault has been really making the difference, and it’s significantly better than the cheap plasticky-feeling cabin of the last car. New materials give it a more upmarket feel, while even the regular seven-inch touchscreen on our test model offers all the functions you could wish for (smartphone mirroring, sat nav, etc). More tech is offered with the larger 9.3-inch unit and the cool digital dials, though we don’t see the need to pay extra for them when the standard setup works perfectly as it is.

This new platform also makes the Clio noticeably more spacious, even though it’s actually smaller in dimensions than rear seats. Its 391-litre boot is the largest you’ll find in the supermini class, while rear space is generous enough for adults, too.

Our only real gripe is that on all but top-spec models, the Clio features incredibly obvious blanked-off buttons. It detracts from the more upmarket feel elsewhere in the interior and appears poorly integrated.

Even despite the many improvements to the Clio, it still quite noticeably undercuts rivals, such as the Ford Fiesta, with a list price starting from £14,295.

Standard kit is impressive and includes LED headlights, air-conditioning and plenty of driver assistance tech, though we’d skip the entry-level Play model and head for the Iconic grade instead. This brings rear parking sensors, 16-inch diamond-cut alloy wheels and a seven-inch touchscreen, and pretty much features all the equipment you could ask for from a supermini.

Our test model came in this grade, and cost a very reasonable £16,295, pre-options.
While you can spend more than £20,000 on a top-spec model, this version here offers a great balance of equipment and affordability.

This new Renault Clio is a big step forward compared to its predecessor and makes key improvements in all the areas where it needed to – the interior and driving experience, namely.

It might not lead the way for driver enjoyment, but the new Clio is an accomplished all-rounder that offers great value, spaciousness and comfort. This mid-spec Iconic grade and TCe 100 petrol engine tested here is also a winning combination – offering just the right amount of performance for a car of this size, plenty of standard kit and low running costs. With all these attributes up its sleeve, it undoubtedly makes the Clio one of the best superminis on sale today.