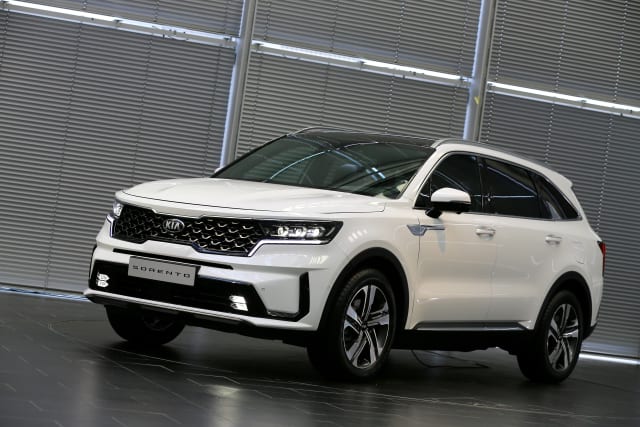 Kia has released many details on its latest-generation Sorento, breathing new life into one of the firm’s most popular models.

Set to go on sale in Europe in the third quarter of this year, the new Sorento joins the Xceed, Stonic and Sportage in Kia’s range of SUVs.

Now 10mm wider with a wheelbase 35mm longer than the previous-generation Sportage – yet featuring shorter overhangs – the new car incorporates a practical and spacious cabin with seating for seven. With five seats in place, there’s 821 litres of boot space – or 910 litres on five-seat-only models – which drops to 187 litres with all seven seats in place.

A new 12.3-inch digital driver display kicks off the Sorento’s tech offerings and is bolstered by a 10.23-inch touchscreen infotainment system in the middle of the dash. A smaller eight-inch system will be fitted on lower specification cars.

Kia is also introducing a new hybrid powertrain with the Sorento, combining a 1.6-litre turbocharged petrol engine with a 44.2kW electric motor and batteries. While a standard hybrid will be available from launch, a plug-in version will come to market later on in the year.

The only powertrain available alongside the hybrid from launch is a 2.2-litre turbocharged diesel with 199bhp and 440Nm of torque, linked to an eight-speed dual-clutch automatic transmission. Emissions and economy figures are set to be announced closer to the car’s arrival.

A suite of driver assistance systems will be fitted, too, with features such as forward collision-avoidance assist and blind-spot view monitor helping to bolster the car’s safety credentials. The new Sorento also incorporates the firm’s first multi-collision brake system, which can help to reduce the impact of secondary collisions by applying the brakes even after the airbags have been deployed.

All cars will come with Kia’s seven-year, 100,000-mile warranty as standard, with prices and specifications released over the coming months.