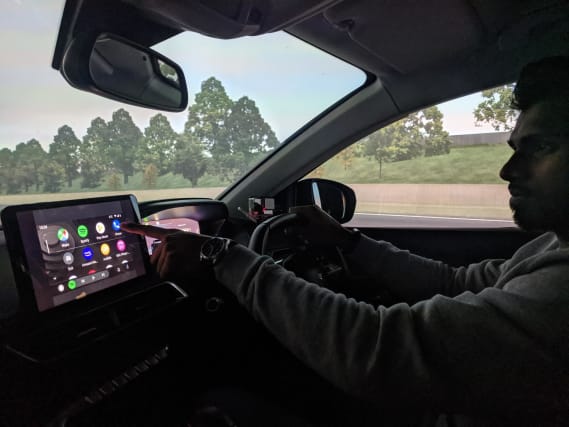 The latest in-car infotainment systems are so distracting that they can have a worse effect on drivers’ reaction times than cannabis or alcohol.

A new study by road safety charity IAM Roadsmart looked at how drivers behaved while using Apple CarPlay and Android Auto on a simulated test route, compared with driving the same route without interacting with the systems.

It found that reaction times were five times slower than a person driving at the legal limit of alcohol consumption, and were ‘significantly slower than someone who had used cannabis’. The result was an average stopping distance of between four and five car lengths.

The shocking findings were compounded by the fact drivers had taken their eyes off the road for up to 16 seconds during the test, which would be equivalent to travelling more than 500 metres at 70mph.

Neil Greig, policy and research director at IAM RoadSmart, said: “Driver distraction is estimated to be a factor in around a third of all road collisions in Europe each year.

“While previous research indicates that Apple CarPlay and Android Auto perform better than more traditional buttons and controls, the results from this latest study raise some serious concerns about the development and use of the latest in-vehicle infotainment systems. Anything that distracts a driver’s eyes or mind from the road is bad news for road safety.

Other findings from the survey indicated that drivers struggled to hold a consistent speed, position in their lane, and distance to the car in front. They also underestimated the amount of time they spent looking away from the road by as much as five seconds.