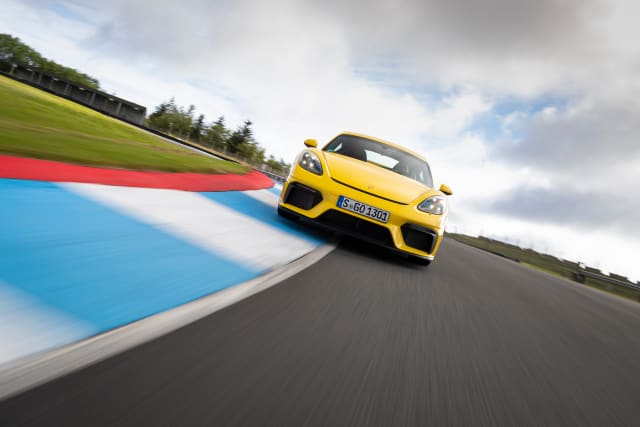 The previous generation Porsche Cayman GT4 went down in motoring history as one of the all-time greats. Sharp, uber-aggressive and packing mechanical know-how from its 911 GT3 big brother, there were few who came away from driving it with anything less than a Cheshire cat grin on their faces.

Now, it’s time to see if Porsche has managed to repeat its earlier success with this, the new 718 Cayman GT4. A new engine, new body and new mechanicals does mean this car is quite different from the old one – but can it deliver the same visceral experience? We’ve been driving it to find out.

There’s quite a lot that has been updated over the older GT4 and, while this latest version also wears the 718 badge of the latest generation of Cayman and Boxster models, you’ll find no turbocharged four-cylinder engine here – though we’ll come to that later. The small, compact body remains, however, along with a driver-focused interior.

The suspension has been revised, and all of Porsche’s know-how from its GT cars has been applied. In short, this is a car which has been designed to be as good to drive as possible.

The 718 Cayman GT4 does away with the four-cylinder turbocharged petrol engine from the standard car, instead utilising a 4.0-litre naturally-aspirated flat-six. It’s essentially the same engine as you’ll find in the current 992-generation 911, albeit stoked up from 3.0-litres to four, while the turbochargers have been ditched too.

It’s all sent to the rear wheels through a six-speed manual gearbox. Power comes in at a healthy 414bhp, while torque is 420Nm. It makes for a 0-60mph time of just 4.2 seconds, while flat-out the GT4 will manage 188mph – though this is a car which focuses far more on its performance in the bends than on straight lines alone. It’s why the Cayman now features a huge rear wing – allowing the car to develop 50 per cent more downforce than the one it replaces – which helps to give it even more traction during high-speed cornering.

Slot behind the wheel of the GT4 and almost immediately things feel spot on. The seating position is excellent, while the fixed-back bucket seats keep you snug and secure. Turn the key, and the engine barks into life – a stark contrast to the Subaru-esque grumble that you get from the standard Cayman.

Move off and initially, things feel firm; the ride suffers over potholes when moving slowly, but add speed and the beautifully-judged damping takes the initial edge off any imperfections. The steering boasts excellent weight too, and the whole car appears to goad you into carrying more speed through corners. It’s a truly impressive package, helped no end by a charismatic engine and a superbly sorted six-speed manual ‘box which only goes to remind you that, though automatics have come on leaps and bounds in recent years, sometimes there’s no replacement for the involvement a manual like this gives you.

It’s likely that few will be able to make too much of a distinction between this latest GT4 and the older car. It’s somewhat sharper in design, that’s for sure, with slightly edgier head- and taillights.

The biggest difference, however, is that gigantic rear wing which now dominates the overall look of the car. In all, it’s still a hugely impressive-looking thing, and one which will no doubt turn the heads of many as it passes by.

As we’ve already mentioned, the interior of the GT4 is focused around the needs of the driver, which is why key buttons and controls are within easy reach. The seating position is superb, and though the fixed bucket seats don’t offer any adjustment in terms of height, the spot to which it’s been mounted will likely be on the money for most.

The cabin feels classically Porsche, with plenty of high-end materials such as Alcantara and leather used to cover vast swathes of the interior. It feels focused without being Spartan, and lightweight without being tacky. Essentially, it’s a great compromise between the strive for lightness and the need for a few creature comforts.

There are still plenty of bells and whistles included in the GT4’s standard specification to keep most people happy. Centre of the offerings is Porsche’s infotainment system which houses Apple CarPlay and media functions – though Android users may notice the lack of Android Auto. It’s a tactile and easy to use system – though smaller than many other offerings – and integrates well into the car’s cabin.

You also get a customisable 4.6-inch display housed in one of the instrument binnacles ahead of the driver, and this can be used to relay information such as speed, media controls and even satellite navigation. All of this comes as standard with the cars’ £75,348 base price, though options such as LED main headlights (£1,397) and those full bucket seats (£3,788) bumped our test car’s price up considerably – reaching the heady heights of £94,506 after options.

This latest-generation Cayman GT4 had a lot to live up to; its predecessor remains one of the best sports cars ever produced, so it’s pleasing to report that this version is almost as exceptional. The engine may ever-so-slightly lack the character of the one fitted to the older GT4, but it’s just as exciting and no less potent. This latest Cayman is a car which showcases the very best of what a sports car can do, and it’s why it’s one of the most impressive on sale today.