Long-term report: Welcoming our new SsangYong Korando onto the fleet 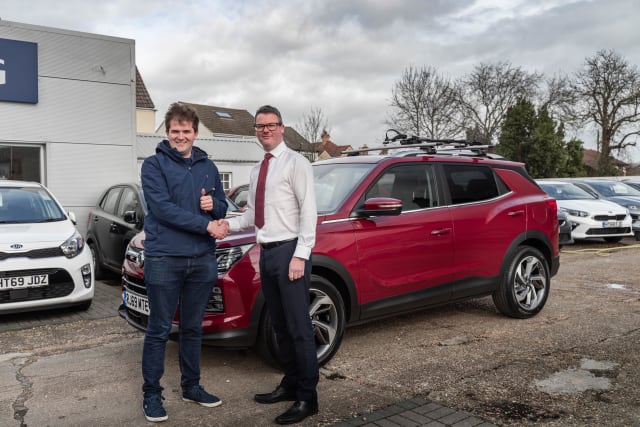 Look at Kia and Hyundai today and it’s a very different story to where these firms were just 15 years ago.

This pair of manufacturers have radically changed and are now truly in the mainstream. But there’s a third, lesser-known South Korean manufacturer that’s still fighting to get to this position – SsangYong.

Say the brand name to the average person and you’d more than likely get a blank look, with SsangYong’s range of SUVs and pick-ups (that’s all it sells) only really having appeal to caravanners and those that need rugged ability from their vehicle.

But with the new Korando, the firm aims to change that, with a far more modern and upmarket-feeling crossover that’s a world apart from its disappointing predecessor. I’d already been impressed on the launch by this Kia Sportage-rivalling model, but now I have the ultimate test for it – living with it for six months.

But first a trip to our local new dealer – Fine Cars SsangYong Gosport – to pick it up.

At just four miles from the office and just two miles from my front door (something plenty of buyers care about), it couldn’t be handier. Along with Kia, the brand it shares its site with, they are only the main dealers in sleepy little Gosport.

More impressively given the excellent handover experience we had, this is one of SsangYong’s newest franchises, and is more of a used car site than a flashy main dealer. To give a sense of how new it is, the SsangYong branding was only put up three days prior to our collection…

But back to the car for a second, as the Korando is the mid-size model in the brand’s range – squeezing between the Tivoli and Rexton. We’ve already tried it as a diesel four-wheel-drive (the configuration that towers will buy), but here’s our first go in the new 1.5-litre petrol engine producing 161bhp and 280Nm of torque. It’s mated to a six-speed automatic gearbox, which sends its power to the front wheels.

If you want an automatic petrol, your only option is this top-spec Ultimate model. It’s appropriately named for sure, with kit highlights including full leather upholstery, ventilated and heated seats and a massive 10-inch touchscreen.

It’s painted in, what is in my eyes at least, the best colour for it – a metallic Cherry Red that comes alive in the sun and rides on 18-inch alloy wheels. Both are fitted as standard, as is most of its kit, for a not unreasonable £27,995. In fact, the only thing that doesn’t come with the Korando normally is the Thule roof bars and bike carrier we’ve specified.

On Fine Cars’ compound, it’s the Korando that’s clearly the big-seller – the bulk of stock seemingly being for this model. Either of this new generation (which debuted in August last year) or of the frumpy previous generation.

Site manager Ben Harris tells us that out the vast majority of expressions of interest at the dealership are for the Korando, and that this is a key model to help change SsangYong’s image.

Harris said: “SsangYong has a distinctive customer, and a very strong following. They know what they like, and they know exactly what they want.

“But the brand is changing, just like Kia did, and SsangYong is very much transitioning and evolving into the family market. Yes, it retains that towing pedigree, but overall it’s adapting, and the Korando is leading the change.”

And on first impressions, I’m in agreement. The package feels on par with mainstream competitors, with its large touchscreen and seriously impressive digital dials (which we’ll cover in future reports) actually making it feel more premium than the likes of a Kia Sportage, for example.

And gripes? Well, we’ve only had it a matter of weeks so there are no glaring concerns, but there are a few minor annoyances. The gearbox isn’t especially smooth around town, and the Korando bings and bongs like you wouldn’t believe to warn you of various things. Sure, it’s trying to be useful, but they could definitely be toned down somewhat.

With six months to spend with the Korando, I’m keen to see if it can live up to this new SsangYong image and be a model worth considering over the best-sellers. Let the fun and games begin…