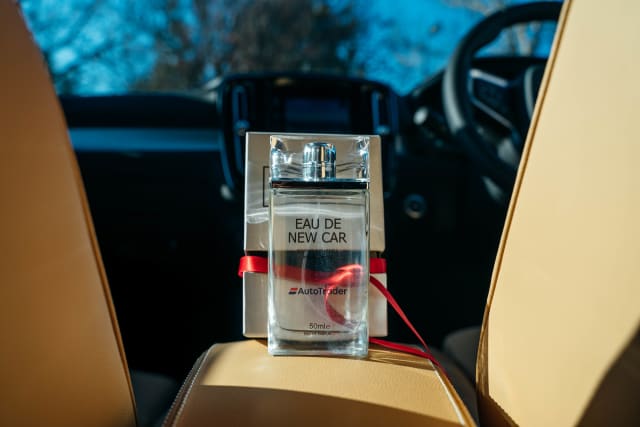 There’s nothing quite like the smell of a new car. Opening the door on a fresh motor and getting a waft of the combination of new materials mixing together in an enclosed space for the first time always brings back the exciting memories of getting a new car.

And according to online car marketplace Auto Trader, a quarter of British adults associate the smell with success and, the research suggests, people who are considered successful get more respect in the workplace and are considered more attractive.

So, it decided to try to bottle that winning smell and charge a frankly ludicrous £175. No, this is not an April Fool’s Day prank.

What’s in the bottle?

For the equivalent of a monthly payment on an actual car, you get a 50ml bottle of Eau de New Car instead. Auto Trader says it has been ‘expertly crafted to replicate the alluring and inspiring smell of a new vehicle’, saying that the scent ‘blends notes of fine leathers and hard wax from the most premium of vehicles’.

In truth, it’s a largely inoffensive smell. While we’re no experts in discerning individual notes within the scent, we regularly test brand new cars and, to be honest, this does not smell of that.

In fact, it’s quite difficult to say what it smells like, other than being closer to a watered-down whiff of a cheap unbranded fragrance from the corner shop, rather than something worth twice what you’d pay from established luxury brands like Gucci and Yves Saint Laurent.

If you’re wondering whether the packaging redeems the disappointing scent, you’ll be left disappointed further. The outer box is a simple white cardboard number with a red ribbon, that reveals a black interior when the lid is lifted. The label on the front also appears to have been stuck on by hand, as it’s just wonky enough to be noticeable.

The bottle itself is held within more black cardboard, which quickly loses shape and rips as you pull the item itself out. The bottle is nicely designed, though, with a long curving ‘D’ shape with a flat front.

The glass on the front looks a little cloudy, and on closer inspection it’s apparent there’s a transparent sticker that attracts grubby fingerprint marks and quickly loses the bottle’s sheen. Meanwhile, the Eau de New Car text looks like the designers simply used the default font from whichever software they used.

Auto Trader’s Eau de New Car is a fun idea, which aims to create a buzz around that much-loved new car scent. And along with the glossy advert with former Top Gear presenter Rory Reid – who now hosts the company’s YouTube videos – it’s got all the makings of a great marketing campaign. However, it would probably work better on April 1.

This review could have been written more tongue in cheek if it wasn’t for the price. If you’ve got £175 to spare on a joke gift for a friend or loved one then have at it, but if you must find a fragrance that reeks of success, you’d be better treating to yourself to a bottle from a genuine fragrance brand – and save yourself 70-plus-quid in the process.