First Drive: The VW T-Cross is a capable, practical, but unexciting SUV 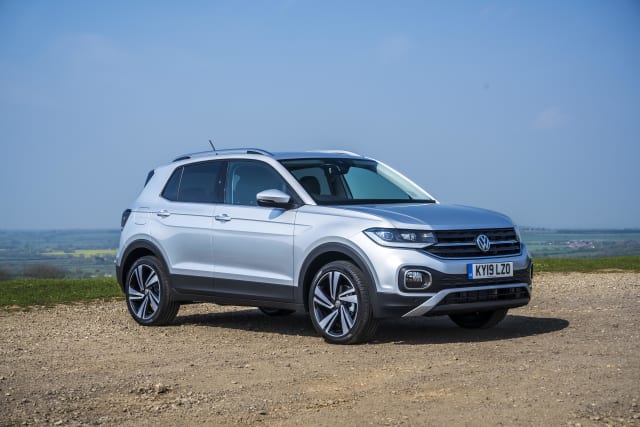 Volkswagen’s ethos is to cover all bases of the market. Within its own brand, it has small cars, big cars, premium cars, city cars and everything in between. The VW Group, meanwhile, has a wide range of brands that cater to buyers in all segments, from luxury to budget, high performance to family runaround.

It’s no surprise, then, that the T-Cross joined the firm’s line-up last year to fill the small SUV gap. Despite being available with questionable orange alloy wheels, it’s actually more of a grown up, subdued option than many of its rivals.

What with this being the first time VW has entered the small SUV segment, this an all-new thing. But this being Volkswagen, there’s a lot of parts-sharing with existing models – for example, its underpinnings come from the Polo hatchback and it gets a selection of the firm’s petrol and diesel engines. Here, we’re testing the diesel, which joined the T-Cross range some time after launch.

Other new features include the ability to move the back seats to prioritise leg room or luggage space, a choice of manual and automatic transmissions, and a smattering of safety systems.

This new diesel engine is a 1.6-litre unit that Volkswagen is pushing as the frugal option in the line-up. Its on-paper figures make for impressive reading in this department, promising 50.9mpg and CO2 emissions of just 110g/km. Over our time with the car, in mixed city and motorway driving, we saw fuel economy in the mid-40s, so running costs will be low.

What makes for less exciting reading is the performance figures, with just 94bhp and 250Nm of torque on offer; in our auto-equipped test car, that means a 0-60mph sprint – or rather, stumble – of 12.5 seconds. However, the T-Cross’s small dimensions mean that’s actually more than enough to get around, rarely feeling sluggish in town or dangerously outgunned on the motorway.

It’s the driving experience that really rams home the T-Cross’s grown up pretensions. To call it boring to drive might be accurate, but it’s doing it a disservice, because it’s fuss-free motoring at its best. There are few frills and fewer thrills, but whether you’re in town or travelling longer distances, it’s always easy and relaxing behind the wheel.

Perhaps the only complaints that could be put towards the T-Cross are that those lethargic engines do mean that travelling with all the family and associated luggage for a weekend away can make the car become rather sluggish, while motorway journeys do incur quite a lot of road noise.

Despite sharing a lot underneath with the Polo, VW has resisted the urge to make this simply a high-riding version of the hatchback. Instead, the T-Cross actually looks more like the firm’s SUVs, just in miniature. That means it gets chunky styling that makes it look like it could go off-road even though it probably couldn’t handle much more than a gravel driveway.

There are few sharp slats and angles in the body work that attempt to portray sportiness, either. Instead, there are soft edges that tread the line between cutesy family car and serious SUV perfectly. The black rear light bar does seem at odds with the rest of the car, though it certainly makes it stand out from the crowd.

The interior continues this grown up, functional theme. As we’ve come to expect from Volkswagen, everything feels well put together and high quality, but there are some cheap-feeling plastics here and there. Its design is also wholly uninspiring, with the chunky switchgear and the standard-fit dials already looking dated.

But when it comes to practicality, the T-Cross is a real winner. Once you’re sat inside, you’d never believe it was based on something as small as a Polo, with the interior feeling airy and spacious. For rear passengers, that sliding seat is a bonus, while those wanting to carry lots of luggage will love the extra boot space that can be provided. The T-Cross has practicality at its core, and it’s really nailed the brief.

There are four trim levels on offer, ranging from the entry level S to the sporty-looking R Line. Prices start at £17,395 for the former, with standard equipment including 16-inch alloy wheels, air conditioning, DAB radio and Bluetooth connectivity, speed limiter and fabric upholstery.

Optional extras fitted to our test car included a £375 active info display, which fits a digital screen in the instrument binnacle and helps modernise the interior, a £300 winter pack that adds heated front seats and is most welcome in cold weather, and a black design pack, which adds various black exterior pieces – including the 18-inch alloy wheels – for £630.

It’s subdued but handsome, with badge appeal too, and for those who don’t need something to offer thrills on a back road, there are few that can compete. This might just be the ultimate small SUV for family life.