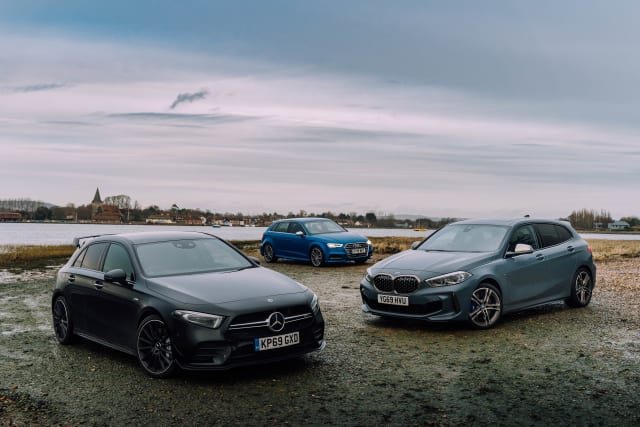 It’s hard to believe how quickly the hot hatch arms war is ramping up. It used to be the case that this segment was dominated by lightweight, zingy options, yet now, the segment is boasting performance figures which would put the supercars of 20 years ago to shame.

We’ve got three key contenders with us here – the Mercedes-AMG A35, the BMW M135i and the Audi S3. All three use turbocharged four-cylinder engines, all offer all-wheel-drive and each aims to toe the line between everyday usability and outright performance. But which one can actually deliver? Let’s take a closer look.

It’s probably best to start with the Mercedes. Technically the lesser-powered AMG-fettled A-Class – the 400bhp A45 is the top dog – the A35 uses a 2.0-litre turbocharged petrol engine with a still-considerable 306bhp. As well as 400Nm of torque, it means that 0-60mph is dispatched in just 4.7 seconds and, flat-out, it’ll hit 155mph. Like we said, almost supercar-like performance.

It also comes accompanied by Mercedes’ own 4Matic all-wheel-drive system, which means that it’s able to deliver great traction while also proving safely capable in the dry. To drive, it’s sharp and direct and though the engine may not sound all that interesting, it’s butter-smooth in its power delivery, which helps to add a touch of class to the whole affair.

The interior is based on the current-generation A-Class too which is no bad thing, and it’s packed with technology and feels like a genuine step-change over the older A-Class. As a rounded package and one which costs more than £35,000, it feels like a real contender.

Audi’s S3, meanwhile, is somewhat of a battle-hardened warrior here. The A3, in its current guise, has been with us for quite some time now and in many places it shows; the cabin simply isn’t as exciting nor as up-to-date as the other two here while the exterior design, though relatively neat and tidy, feels a bit too conservative by modern standards. Audi has already revealed its new A3, so we’re expecting a more flamboyant S3 to be on the cards soon.

However, it’s hard to fault the drivetrain. Again, we’re looking at a 2.0-litre turbocharged four-cylinder petrol engine sending power – 296bhp this time – and 380Nm of torque to each wheel through a seven-speed dual-clutch automatic gearbox. The powertrain feels strong and, with a 0-60mph sprint of 4.6 seconds, it nips past the A35 by a hair.

However, if you’re after a more everyday hot hatch then the S3 remains king; the ride may be a touch fidgety but the undercover looks and discrete performance make for less of a ‘look at me’ experience than the bewinged Mercedes. In truth, even the relatively undercover-looking BMW can’t quite match the Audi for downplayed looks. A bit too sensible in our eyes it might be, but for most, it’ll tick many a box.

If there was ever a middle ground car, then the BMW is just that, in this instance. Not quite as over-the-top as the Mercedes nor as downplayed as the Audi, it’s a great combination of the two. Though the styling of the 1 Series may be dividing opinion, it’s certainly exciting – though the oversized grille still doesn’t quite work for us.

It may be getting repetitive but yes, under the bonnet is another 2.0-litre turbocharged four-cylinder which here produces 301bhp and allows for a 0-60mph time of 4.6 seconds, matching that delivered by the Audi. The old M135i utilised an enigmatic 3.0-litre straight-six and though the four-cylinder’s somewhat flatulent exhaust tone does make us mourn the loss of that old engine, you can’t blame BMW for moving with the more-efficient times.

Guess what? This engine sends power to all four wheels too, this time via BMW’s xDrive system. It’s truly impressive and gives the M135i an almost unbelievable amount of grip, which makes it well-suited to twisty UK country roads. Cleverly, when you’re pottering around the BMW runs in front-wheel-drive mode, yet press on and on-board sensors can send as much as 50 per cent of the engine’s power to the rear wheels for better cornering and a more playful setup. There’s no way of identifying when it does this, either – it seems remarkably seamless.

However, up and running it doesn’t feel quite as involving to drive as the Mercedes. It’s hard to place a finger on what defines it, in truth, but it’s likely down to the steering; the A35’s steering rack makes the car feel just a little more eager and bit keener to turn-in. Both BMW and Mercedes offer more than the Audi, mind you, but the S3 does counter well by riding in a more composed way than the other two.

So which one to go for? Each car here certainly has its individual merits. The Audi certainly feels like a car you’d happily drive each and every day; the brakes are sharp and progressive and the car, as a whole, feels well-rounded. But it’s dated and lags behind the other two here in terms of outright driver involvement, which in the hot hatch segment is crucial.

Then there’s the BMW. Certainly, the technology underpinning this latest M135i is impressive, and its ability to shift power around all four wheels seamlessly is something you can’t ignore. It’s exciting, too, and though the new four-cylinder lags behind the old straight-six unit in terms of character, you can’t fault the way it delivers here.

But it’s the Mercedes which shines through, and that’s because of the way it drives. It’s an added bonus that the cabin is excellent, mind, and that the in-car technology works very well indeed. But the sharpness with which it responds to driver inputs combined with the silkiness of the engine means that the A35 feels like the most rounded package here and, as a result, is the one we’d opt for.