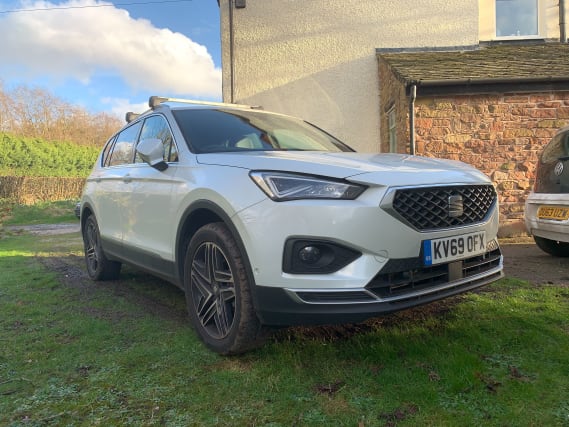 A couple of months into our Tarraco’s term and it’s settled in rather well – both for the cycling contingent in our office wanting to chuck their bikes in the back and if we’ve needed to haul kit around for various events.

Its huge boot and decent legroom have made it incredibly useful, while the fairly reasonable tank provides around 500 miles-worth of fuel, which has been great for longer trips.

With these factors in mind, I decided to use the Tarraco for a couple of road trips, just to see what the car we’ve affectionately called ‘Moby Dick’ is made of.

Trip one involved transporting the family dog from my flat in south Hampshire to meet my mum in west Dorset for a birthday meal – a round trip of about 180 miles. Nothing too ridiculous, but using mostly A-roads beyond Bournemouth and smaller B-roads in west Dorset.

Giving myself three hours to get to the lunch date, I filled the back seats with all of the dog’s stuff and put her cushioned throne in the boot. She’s getting on in years but seemed comfortable, and apart from barking at a couple of cyclists she appeared to be perfectly happy.

However, on this journey I found small issues with our long-termer that started to grate. The bike rack ours is fitted with is very whistly at motorway speeds when not carrying a bike. Unless you have the music or radio turned up so you get a mild bout of tinnitus, you can noticeably hear it.

Then there’s the overall ride. The 19-inch alloy wheels look great but transfer a lot of the cracks and bumps into the cabin – something that can get tedious on longer jaunts.

A couple of features I would have expected on our top-end Xcellence model are also missing, such as heated seats and better seat material.

Anyhow, the overall trip was a success. A happy mum with her presents and a £25 tank top-up on my return home. Job done.

The second in my mini road trip series was going to be a much longer one – roughly 600 miles, in fact. Rochdale may not be the most picturesque place in the world, but when a friend’s birthday came knocking, I couldn’t help but lay on transport for a few other chums with the Tarraco as our steed.

Here, we could really test how the Tarraco copes over long distances and see what three 20-somethings thought of it.

With all of our kit easily fitting in the boot, things continued to go well. After swinging by Southampton to pick up two of the crew, we headed north, pausing only for a food-based family stop-off in Shropshire that constituted a two-thirds marker on the trip.

With the road trip playlist blaring and chit-chat flowing, the Tarraco took the wet and blustery weather of that Friday evening in its stride. Setting the adaptive cruise control to the speed limit and letting the car mostly take care of itself is one of the small joys of modern driving – even in stop/start traffic around the usually crowded Birmingham section of the M6.

Dinner consumed at our Shropshire stop and with the roads quieter than an hour or so before, we made it to our weekend halt with little trouble before 11pm. That was 278 miles down for the weekend.

Come Sunday and our return trip, the Tarraco was ready with slightly under half a tank. After a quick £15 fill-up just to be safe, we set off for Hampshire, with the slightly groggy contingent wanting to be wrapped up in bed by a reasonable hour.

Again, setting the cruise control and making sure not to follow any of the other cars too closely, Lancashire was in the rear-view mirror in no time and we got to Shropshire effortlessly for food once again.

With everyone now feeling very sleepy, I set myself in for the long leg to the top of the A34 by whacking the music up and letting the car do its thing. In that time, I kept tabs on the Tarraco’s efficiency, with the turbocharged diesel returning close to 40mpg for the journey back – a good couple of mpgs better than Seat’s claimed figure.

Finally reaching home after dropping everyone off, that figure remained the same. A £66 fill-up was quite a sting after a weekend of enjoyment, but for a big SUV with this much practicality it wasn’t too terrible.

My fellow road-trippers did have some issues with the Tarraco, though. They found the rear seats quite uncomfortable and the rear fold-out tables not as supportive and useful as they might have liked.

Also, unless you have a fully kitted toolbox, the bike rack couldn’t be taken off easily at all – so much so that we left it to whistle away as I drove.

But can these niggles really detract from the overall experience of the Tarraco? Not so much. It proved perfectly capable of almost everything we threw at it, and considering how much it costs – £35,305 on test – it’s remarkably good value for money, even without the odd bit of equipment here and there.

The fuel economy was also excellent – proving much better than what Seat expects it to do and making sure you get the most out of every tank.

Would I personally spend my money on it? As an ardent estate fan, it may be tricky to pull me away from the likes of a Skoda Superb or BMW 3 Series Touring.

But the Seat has shown that even though it’s not what I’d usually want for a road trip, it can do the job just as well.