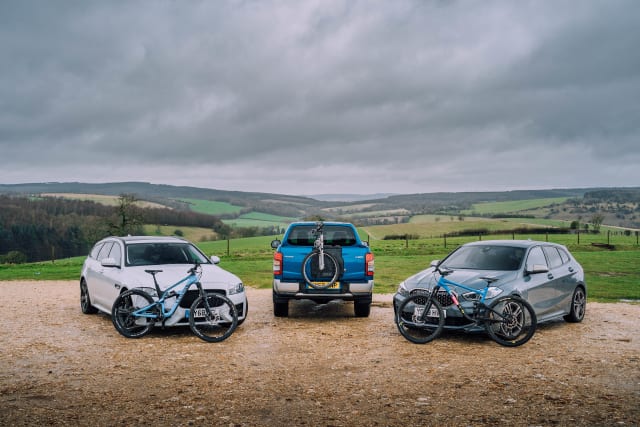 Cycling remains a huge deal here in the UK. According to government statistics, 2.4 million people cycled at least once a week during 2018, which means that people are heading out on two wheels more than ever.

However, this frequency does mean that the need to transport a bicycle is greater too. In truth, bikes can be a real pain to move around; they’re relatively long, somewhat cumbersome and – even when well maintained — a little oily, too. However, we’ve taken a look at three completely different styles of car to find out which makes moving your bicycle around a little easier.

Up first is the BMW M135i. The firm’s latest performance hatch, it sits on an all-new platform which, as well as changing the driven wheels from the rear to the front for the first time in 1 Series history, promises better interior space. So it should swallow up a standard mountain bike, right?

It can – but at a bit of a push. We found it easiest to remove both wheels and carefully place the frame and its components into the car (with an old mat helping to protect the interior). Even then, it’s a bit of a squeeze, and the two wheels have to be secured properly to stop them rattling around when on the move.

However, the benefit here is that once you’re loaded up, you’re left with an excellent hot hatch which remains unaffected by the additional weight. There can be the occasional rattle, but for the most part you’re unaware that there’s a bike in the back. Of course, this does remove the option of taking more than two people along for the ride – and we wouldn’t recommend putting more than just one bike in the boot – but it does showcase that, at a stretch, even a relatively compact hatchback can be used to get your two-wheeled pride and joy around.

Then there’s the Mitsubishi L200, which offers a completely different take on the whole process. We’ve maintained the fact that pick-up trucks are at the same point the most – and the least – practical modes of transport available today. On the one hand, the huge load bays they offer mean that they’re great for lugging larger items, yet on the other, if that loading area lacks a cover then you’re either going to have to pack the cabin full of goods or leave them open to the elements.

However, with the addition of a pick-up pad, the L200 becomes one of the very best bike transportation vehicles around. Simply attach the pad, lift the bike up and into the load bed – leaving the front fork overhanging the bed door and you’re away. Thankfully our Marin’s clearance is enough for it to easily slot in place, though we reckon a road bike could prove a little bit more difficult. It’s best to secure the rear wheel too, in order to prevent the bike from bouncing around, but it really is one of the simplest systems we’ve seen. It also looks awesome, in our eyes, which is a nice bonus.

Of course, the L200 can’t match the other two here in terms of outright driver involvement, with even this latest version of Mitsubishi’s well-regarded pick-up lacking the overall comfort and composure of even entry-level crossovers, but the ability to keep your mucky bike separate from the cab is well worth the trade-off.

You’re left with enough room to transport four in the cabin, too, though if they’re got a lot of luggage with them you may end up in a bit of a squeeze. A solution we thought of, however, was to add water-resistant bags and secure them to the bed — though security remains an issue, as is the case with the bike rack in general.

Then we come to the Jaguar XF Sportbrake. The estate car has long been the go-to mode of transport for cyclists, owing to their large boots and comfortable driving experience. The XF certainly ticks those boxes; with 565 litres of seats-up boot space and a huge 1,700 litres with them folded down, it offers once of the best-sized load area in the business. Those seats fold down completely flat, too, so there’s no annoying step or lip to have to deal with when loading your bike into it.

And when you load a bike into there, boy is it easy. You still need to remove the front wheel – there are few cars where this isn’t the case, and our Canyon mountain bike seems pretty large too – but once that’s taken care of the frame and rear wheel slide neatly into the back of the XF with room to spare. There are even handy pockets at side of the load area where you can store shock pumps, tyre levers or spare inner tubes in readiness for your ride.

Another worthwhile function that comes with the Sportbrake and is ideal for cyclists is the Activity Key. It’s a fully waterproof wristband which means you can leave the regular key in the car and use the band to lock and unlock the XF instead. It took us a few times to get it to work, but before long we got the knack. It certainly saves stress when out cycling and the fear of losing your keys from a pocket or bag is very much real.

Out on the road, the Sportbrake is as relaxed and as composed as you’d like it to be. The suspension is well-sorted (the rear air setup is self-levelling, so no matter what you put in the back it stays on the level) and you’ve got that added security of being able to lock the bike in the car when you leave it. We still wouldn’t risk leaving a mountain bike in full view while parked, but it does give you a bit of flexibility when you need to nip out of the vehicle quickly.

Our test has shown that, even with the most compact of cars, transporting a bike doesn’t have to be a hassle – though it does take a bit of imagination in some cases. We’d still lean towards the Jaguar as the best option here, though the L200 comes in a very close second. It’s only the added security benefits that the estate car affords which help it to trump the Mitsubishi. However, if it’s out-and-out bicycle-loading ease, then the pick-up could be the one for you.

Are these the best rallying supercars of all time?