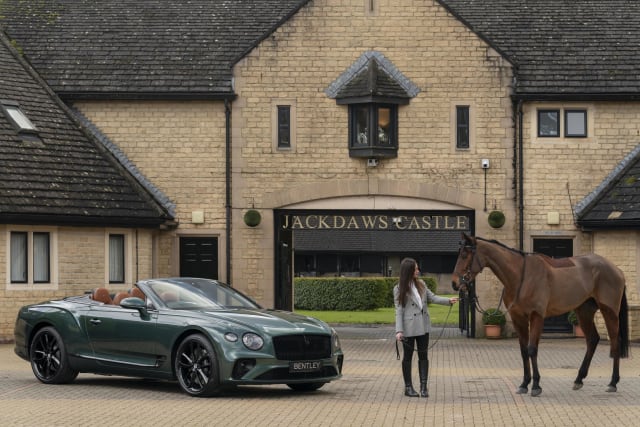 The first vehicle to come from Bentley’s bespoke Mulliner Collections division is called Equestrian Edition, inspired by The Cheltenham Festival.

Held at Cheltenham Racecourse, the festival is one of the most iconic horse racing events in the world, and Bentley Bristol commissioned this one-off tribute ahead of this year’s event, which takes place this week.

Based on a Continental GT Convertible, it has various equestrian-themed features, such as a horse and rider symbol on all four seats, which are also upholstered in saddle hide. The same symbol has been placed on the dashboard with gold detailing. Other details include tweed diamond quilting and Bentley Mulliner-branded treadplates.

On the outside, there’s a specially commissioned green paint job, as well as the fitment of the Blackline Specification, which replaces various chrome pieces with gloss black equivalents. The black theme is completed by a set of 22-inch alloy wheels.

Bentley has relaunched its Mulliner coachbuilding service with three separate divisions. This Equestrian Edition is part of the ‘Collections’ catalogue, which allows for bespoke versions of the existing Bentley range, while the ‘Classic’ division helps restore and maintain classic models and the ‘Coachbuilt’ division creates limited-run specials.