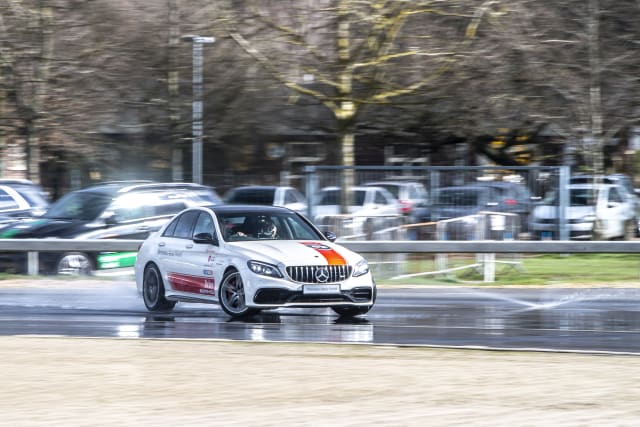 Mercedes-Benz is a brand known the world over. Yet despite that three-pronged star making an appearance in nearly every country, the chance to get behind the wheel of one eludes many. However, with the firm’s Driving Experiences at Mercedes-Benz World in Weybridge, you can do just that — and see how some of its highest-performance models feel like to drive.

We’ve headed over to find out what an AMG Driving Experience includes.

The Mercedes-AMG C63 is a car synonymous with performance. Powered by a twin-turbocharged V8 engine, it’s an immensely powerful car and one which is held in high esteem by critics and fans the world over. Packages to drive this car start from £225 for a one-hour experience, rising to £495 for a half-day test. We managed to slot ourselves behind the wheel of one for a 60-minute session.

Mercedes-Benz World incorporates a tight, twisting handling circuit designed to mimic the UK’s country roads. It’s here where we get used to the car first and foremost. With an instructor sitting in the passenger seat, it’s an easy process to learn smooth steering inputs, level throttle application and the proper placement of the car on the track. It’s here where the ferocity of the C63 is hard to ignore, too, with speeds in excess of 100mph easily reached on the long straight section.

It deals with the corners well too, with the various driver modes allowing you to tailor the car’s settings. We’ve always preferred a softer suspension setup with a more aggressive throttle map, but out on the glass-smooth track, an angrier setting is preferable. Our instructor is quick to change it to that, at least.

Quicker bends require a little more commitment, but it’s not too long before we’re gaining a decent rhythm. In what felt like no time at all, it was time to move onto the next part of the experience.

The skid pan is a place where car control reigns supreme. The middle of the oval is coated in ultra-slippery material akin to black ice, which means that with even the smallest amount of throttle the rear end of the car will step out. Maintaining the slide is the tricky part; it takes far less throttle than you’d expect to keep the car drifting, but before long it’s becoming second nature. Several spins later, and we’re just about completing a full circle sideways. It’s endlessly addictive and one of the highlights of the experience. The C63 showcases just how well balanced it is, while the steering allows you to make accurate inputs. The only downside? That would have to be moving onto the third part of the experience.

Here, we get to test out the straight-line braking on a surface which is similarly slippy to the skid pan. Moving up to speed, it’s hard on the brakes as the car begins to slide forward — ABS jabbing away at the brakes while the car slows to a halt. It’s an impressive showcase of just how quickly these cars can be brought to a stop — even in terrifically bad conditions. Again, it’s teaching you car control too; even though the speeds are relatively slow, you need to maintain the steering correctly in order to keep it slowing down straight and true.

Finally, there’s a section which most drivers will love – a standing start. In a car like the rear-wheel-drive C63, this is more of a challenge than you’d expect, and getting the car away without spinning the rear wheels takes a careful throttle and more patience than you’d think. After two or three runs we’re getting consistently quick starts, though the all-wheel-drive E63 and A35 models blast away either side of us in far quicker times.

Our time testing the Mercedes-Benz World Driver Experience was just a taster of what a conventional one-hour drive would be like. As well as the handling circuit, skid pan, wet braking and acceleration tests, there are also more circuits to try and additional low-speed activities to allow you to get better acquainted with the car.

It’s not just licence holders who can get behind the wheel, either. Those aged under 17 and over 1.5 metres can have a taste of the driving experience too, starting with the basics and, through a rewards programme, can even test out a Mercedes-AMG A35. In short, there’s something for everyone.