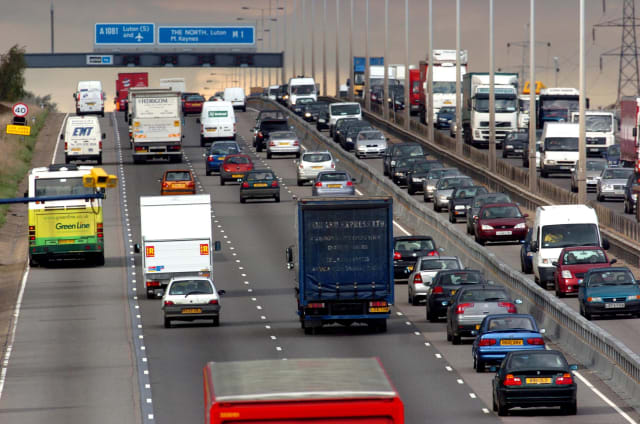 Motorists suffered average delays of 10 seconds per mile on England’s motorways and major A roads last year, the Department for Transport (DfT) said.

This was up 1% on 2018, indicating that congestion on the strategic road network – managed by Government-owned company Highways England – is getting worse amid record traffic levels.

The data suggests driving along a 10-mile section of road with a 60mph limit typically took 11 minutes and 35 seconds last year, compared with 10 minutes in free-flow conditions.

The DfT figures show 67% of additional time was needed to complete journeys in 2019 due to hold-ups.

RAC head of roads policy Nicholas Lyes said: “Regular drivers on England’s major roads won’t be surprised to hear that congestion in many areas is worsening.

“These figures also chime with RAC research that indicates around two-thirds of drivers (65%) believe that journey times on these roads are becoming less reliable.

“While the reasons for this may be complex, record levels of road traffic combined with drivers admitting that they are becoming increasingly dependent on the car are both likely to be significant factors.

“In many cases, drivers have no choice other than to use their vehicles, meaning there is a strong case for continued, sustained investment in England’s major roads.

“It’s also worth remembering that Highways England is in the middle of an ambitious road investment strategy, with many parts of the network being converted to smart motorways and other upgrades happening elsewhere.

“The knock-on effect of these roadworks is likely to mean more congestion on the network, at least in the short term.”