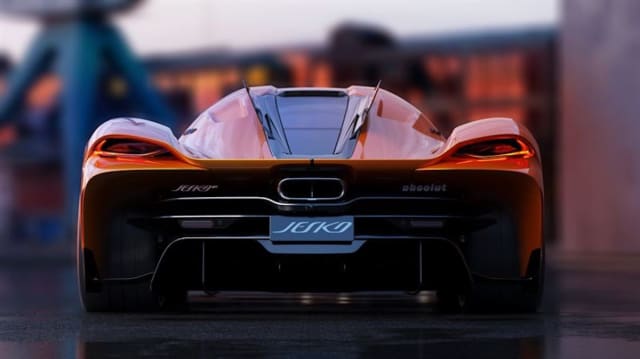 Koenigsegg is aiming for the title of world’s fastest production car with its new Jesko Absolut.

Though the Jesko was first revealed at the 2019 Geneva Motor Show, this is the first time that we’ve seen an ever more extreme version – named Jesko Absolut.

Despite the company not stating an official top speed, it does say that it will hit “higher, more extraordinary speeds than any Koenigsegg or any other fully homologated car before it”. It would mean out-pacing the Bugatti Chiron Super Sport 300, which pushed past the 300mph barrier last year.

A drag co-efficient of just 0.078Cd has been achieved thanks to extensive wind tunnel testing – a Ford Focus has a drag co-efficient of 0.275Cd – with two fins replacing the Jesko’s rear spoiler to make it even more slippery. The rear wheels are covered too, and there’s a longer rear section as well.

Of course, achieving this goal means a slippery design alone won’t do – mechanical performance is needed as well. Fortunately, the Jesko Absolut has that covered thanks to a twin-turbocharged V8 engine with up to 1,600bhp when running on E85 high-octane fuel. Drive is sent to the rear wheels through a nine-speed transmission.

The outright reduction in downforce means that the Absolut has been given a softer suspension setup than the regular Jesko, making it more comfortable. In addition, because the front air dam has been removed in order to reduce downforce, it is possible to stow the roof in the front of the Absolut – a feat not possible in the standard Jesko.