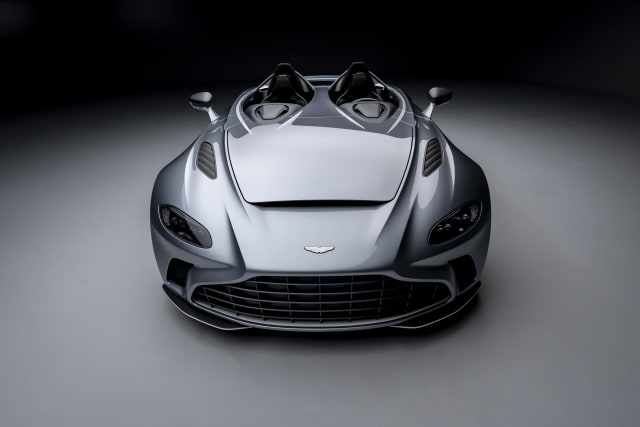 Aston Martin has revealed a limited-run supercar – the V12 Speedster.

As suggested by the name, a roof is completely absent from the car’s design and Aston says that just 88 examples of the model are slated for production.

The car has been designed by Aston Martin’s ‘Q’ customisation department, with a dynamic body sitting on an adapted version of the firm’s bonded aluminium platform which also underpins both the DBS Superleggera and Vanquish – though the chassis for the Speedster is completely bespoke.

It uses a double-wishbone suspension setup up front, while the rear is a multi-link system with coil springs. However, adaptive dampers have been fitted as well, allowing the driver to tailor the car’s ride to their liking.

Driver and passenger are separated by a central spine which runs along the length of the car, while inside the two cells sit chrome and leather elements and 3D-printed rubber sections.

Powering the whole affair is a 5.2-litre V12 engine with 690bhp and 763Nm of torque, sending power to the rear wheels through an eight-speed automatic transmission. Aston Martin claims 0-60mph in under three and a half seconds, as well as a top speed of 186mph. A unique stainless-steel exhaust system has been created for the Speedster too, which should give it a suitably raucous soundtrack.

Order books for the V12 Speedster are open now, with each one accompanied by a sizeable £765,000 price tag. First deliveries are expected in early 2021.