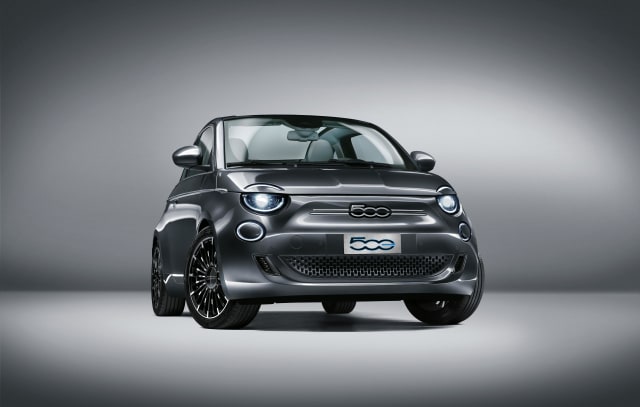 Fiat's popular 500 city car has been reinvented as an all-electric model, offering up to 199 miles from a single charge.

Set to arrive in the UK early next year – and only available in convertible form initially – the new 500 sits on Fiat Chrysler Automobiles (FCA) first bespoke electric car platform, meaning it's now 6cm longer and 6cm wider than the previous 500. It's also 4cm taller than before.

The retro look of the previous-generation 500 has been retained, though flush door handles and LED head- and taillights help to distinguish this latest version from its predecessor.

It uses a 117bhp electric motor linked to a 42kWh battery pack. The total claimed electric range stands at 199 miles, and it should be able to reach 60mph from a dead stop in under nine seconds. The car's top speed is limited to 90mph, too.

It comes with an 85kW rapid-charging system, capable of replenishing the car's batteries from empty to 80 per cent in just 35 minutes and is also capable of adding 31 miles of extra range to the car in just five minutes.

Launch-specification cars, called La Prima, also come with a Fiat charging unit which is able to deliver 3kW charging – though it can be upgraded to 7.4kW.

A new eco-focused driver mode is included in the car, too. Called Sherpa, it reduces power, throttle response and switches of energy-draining ancillary functions like climate control to help better retain battery charge.

Normal and Range make up the other remaining driver modes, with the latter function bringing more regenerative braking.

The 500 also meets legally required low-speed acoustic warning legislation for electric cars in a unique way – by playing one of the theme songs from the film La Dolce Vita.

These launch edition cars – available as a convertible for now – is priced from £29,000 including the plug-in grant. It's expected that more entry-level cars – accompanied by a lower entry price – will arrive on the market shortly.