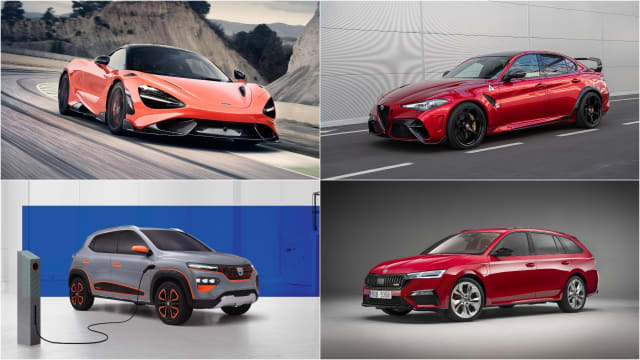 The 2020 Geneva Motor Show didn’t go quite as planned. The show was cancelled just three days before it was due to start, after the Swiss government enforced a 2016 epidemics law to ban gatherings of more than 1,000 people, as it continues to attempt to prevent the spread of coronavirus. It meant that although most stands were built and display cars in place, the doors to the 2020 Geneva Motor Show would remain closed.

However, that hasn’t stopped manufacturers from pushing ahead with reveals of new models that would’ve first seen public light at the show. As a result, we’ve got a variety of concepts, supercars and electric vehicles – among others – to get excited about. Here are some of the key reveals from today:

Unlike both models previously from the manufacturer – the long-on-sale Ateca and recently revealed Leon – the Formentor isn’t derived from a vehicle in parent company Seat’s line-up.

It takes on a look reminiscent of the Cupra Leon, with angular headlights flanking an aggressively designed front fascia, while the rear features a light bar that stretches the width of the car. The Formentor is also described as a ‘coupe crossover’, an ever-growing class of SUV-like cars with tapered rooflines, as is the case here.

Suzuki has introduced a refreshed version of its Ignis, bringing a revised look and improved powertrain to the car.

The Morphoz features an extending wheelbase and battery-swap technology, meaning it can temporarily change size and accommodate an extra battery, thereby increasing its range. Renault says the process takes minutes, with the extra cell storage area beneath the car.

Sitting on the firm’s latest CX-Generation bonded aluminium platform developed alongside the recently introduced Plus Six, the Plus Four retains the smaller body and profile of the previous-generation car yet boasts better cornering and handling characteristics.

Despite featuring design details that are unlikely to make it to the road – such as its dramatic headlights and wing mirrors – BMW’s i4 represents a close representation of what we can expect to see on the final car.

A large kidney grille steals the show, with streamlined bodywork flowing into a minimalistic rear. BMW says this concept shows the firm’s ‘new look’, so expect that oversized grille to be a mainstay of future cars.

Alfa Romeo has let its engineers loose on the high-performance Giulia Quadrifoglio to produce an extreme version of the saloon.

Sitting underneath the bonnet of the Giulia GTA is a ramped-up version of the 2.9-litre twin-turbocharged V6 found in the standard car, now producing 533bhp – a 30bhp increase. Power is still sent to the rear wheels, with a 0-60mph time of 3.6 seconds possible in extreme ‘GTAm’ configuration.

The front end of the car has been made softer in appearance than the outgoing E-Class, with reshaped lights sitting either side of a newly designed grille. Hybrid powertrains are now available across the range, alongside rear- and all-wheel-drive options, too.

This is the Dacia Spring Electric, which is said to preview ‘Europe’s most affordable all-electric vehicle’. It takes on a look similar to that of its current offerings, with a boxy silhouette, rugged design details such as plastic cladding and roof bars, plus skid plates integrated into the front and rear bumpers.

According to McLaren, the in-gear acceleration is 15 per cent quicker than the 720S on which the 765LT is based. It makes for a staggeringly quick car and one that’s limited to just 765 examples worldwide.

The next model to join Volkswagen’s all-electric car line-up will be called ID.4, feature a 311-mile range and be entirely carbon-neutral.

Ralf Brandstätter, chief operating officer at Volkswagen, said: “Just like the ID.3, the ID.4 will also come on to the market as a carbon-neutral vehicle. We will produce and sell the ID.4 in Europe, China and the US.

“The outstanding aerodynamics reduce the drag coefficient and will boost the ID.4’s range to up to 311 miles, depending on the drive package.”

Hyundai has unveiled the Prophecy concept which previews its latest approach to design.

Inside the car, joysticks take the place of a steering wheel to let the driver control the vehicle in a ‘position of comfort’ as well as offer more space in the cabin. There’s also autonomous technology on board, although Hyundai hasn’t said to what extent this is incorporated in the car’s make-up.

Audi has revealed the updated version of its popular A3 hatchback, which now sports a sharper, more angular look and much-improved technology.

While the shape is familiar, the details of its styling are vastly different – especially at the front end, where the headlights and side intakes in particular have been given a more aggressive appearance.

Thanks to a kerb weight of just 570kg, the Mono is able to offer a power-to-weight ratio of 582bhp, which represents a 57bhp-per-tonne increase on the older Mono.

Skoda has finally pulled back the covers on its new Octavia vRS iV following months of teaser images.

Key to the new version of the performance model is a plug-in hybrid powertrain – a first for the nameplate. This sees a 1.4-litre turbocharged four-cylinder petrol engine linked to an 85kW electric motor, combining to produce 242bhp and 400Nm of torque.

The A110 Legende GT is a limited-edition model described as ‘the most refined’ version of the sports car yet by the French manufacturer.

Limited to just 400 examples globally, the Legende GT has seen a number of alterations made to improve everyday usability, such as a bespoke luggage set and a higher level of standard equipment over the “everyday” A110.

It remains available as both a coupe and cabriolet, and features an aggressive aerodynamic package that includes a large rear wing as well as active elements to optimise downforce. Its 3.8-litre twin-turbocharged engine is completely new, too.

Pininfarina has revealed a fresh take on its Battista hypercar – the Anniversario, which is limited to just five units.

Though using the same 1,900bhp powertrain, it takes on a new aerodynamic bodykit as well as a triple-colour paint job crafted by hand. It commands a €2.6m (circa £2.3m) asking price.

Bentley has revealed the Mulliner Bacalar – a seriously limited-edition, hand-built convertible that has already sold out.

Just 12 examples will be built by Mulliner, Bentley’s bespoke division, which has been revived to offer these low-run models as well as exclusive upgrades to standard Bentley models and restorations for classic examples.

BMW M4 ends up underwater after crashing into marina

First Drive: The Volkswagen T-Roc Cabriolet is a great alternative to the drop-top norm