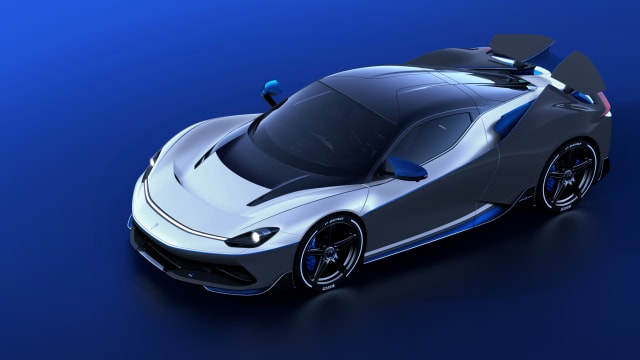 Pininfarina has revealed a fresh take on its Battista hypercar – the Anniversario.

Limited to just five units, it builds a step further on from the standard Battista and celebrates 90 years since the Italian coachbuilding firm was established.

New here is a special livery which is finished in three colours — Iconica Blu, Grigio Antonelliano and Bianco Sestriere — with each painted by hand. There’s also the standard fit of the ‘Furiosa’ package which brings a more aggressive carbon fibre front splitter, side blades and rear diffuser.

A bespoke rear wing and aero fins are exclusive to the Anniversario as well, with all of these changes working to enhance downforce. Weight is also down 10kg thanks to the introduction of new forged aluminium alloy wheels.

Inside the car, new seats have been thrown into the package along with colour-matching accents throughout the cabin.

One thing that hasn’t changed is the electric powertrain. The Battista Anniversario is still powered by four electric motors that combine to produce 1,900bhp and 2,300Nm of torque, resulting in a sub-two second 0-60mph time and a 217mph top speed.

With just five examples available, it’s likely all Battista Anniversarios already have homes by the time you read this. If not though, it commands a €2.6m (circa. £2.3m) asking price.