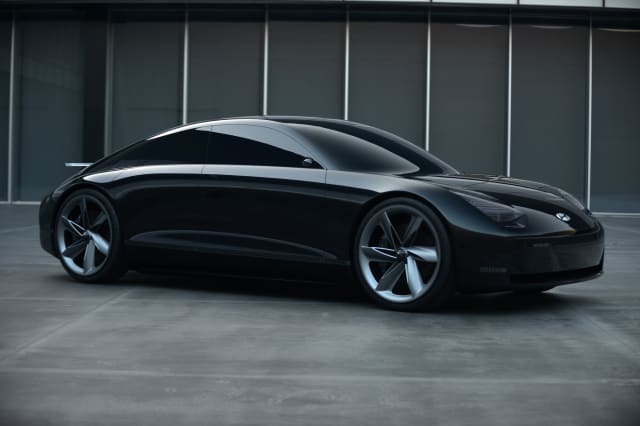 Hyundai has unveiled the Prophecy concept which previews its latest approach to design.

Said to ‘clearly express’ the firm’s marketing line of ‘Sensuous Sportiness’ for its corporate look, this electric saloon takes on an exceptionally sleek silhouette.

The swooping outline of the car is almost completely unbroken, with no folds or creases in the bodywork throughout — save for a large rear spoiler that aims to enhance downforce for high-speed stability.

Large headlights dominate the front of the car, while vertically-set taillights bring a distinctive look to the rear of the car. Both are said to utilise ‘pixel’ LED technology for improved clarity and efficiency, with the tech set to arrive on future Hyundai road cars.

Inside the car, joysticks replace a steering wheel to allow the driver to control the vehicle in a ‘position of comfort’ as well as offering more space in the cabin. There’s also autonomous technology on-board, though Hyundai has not said to what extent this is incorporated into the car’s make-up.

Wool-based carpet has been used as a sustainable material, while ‘Clean Air Technology’ is said to purify air that comes into the cabin as well as circulating it back out pollutant-free.

It’s incredibly unlikely a production version of the Hyundai Prophecy will enter production, though expect it to influence some of its upcoming models.