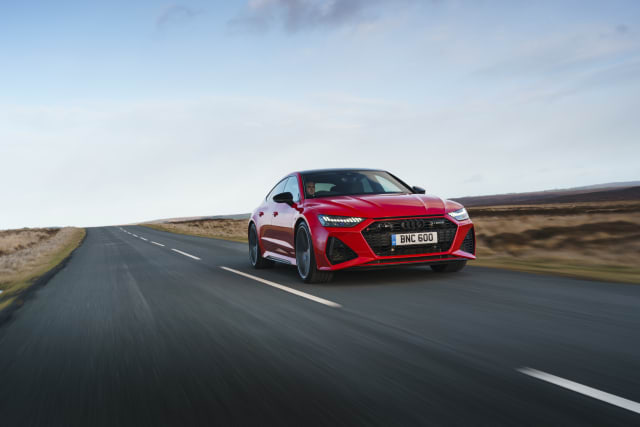 The RS 7 Sportback has always sat in a slightly undercover role within Audi’s line-up. The RS 6 Avant has, time, after time, stolen much of its thunder, bringing the same level of performance as the RS 7 yet with more day-to-day usability.

However, that hasn’t made the RS 7 any less remarkable, and it’s why Audi has seen fit to update this cross-continent leviathan. Power is up, torque is too and the whole car has been given a meaner stance. So, is it still a car in the shadows or is this the RS 7’s time to shine? We’ve been to find out.

There is a raft of changes going on with this latest RS 7. The engine is punchier – though we’ll dig into that in more depth shortly – and a new mild-hybrid system has been incorporated to help keep the RS 7’s efficiency figures within the realms of reality. The interior is wholeheartedly remodelled too, and there is more tech being incorporated than we’ve seen on any A7-derived model yet.

A full RS-specific bodykit has been fitted to the RS 7 too, helping to differentiate it from the standard A7. In the metal, there’s little chance that people will struggle to make the distinction between the two, that’s for sure.

Mirroring the RS 6, the RS 7 uses a 4.0-litre twin-turbocharged V8. Despite being the same capacity as the unit found in the older car, power is up by 38bhp to 592bhp, and torque has been bumped up to 800Nm from 700Nm. It means the sprint to 60mph from a dead stop now takes just 3.4 seconds – three tenths quicker than before – and flat-out you’ll be doing 155mph or 174 in derestricted Launch Edition cars.

Opt for carbon-ceramic brakes, and this top speed increases to a healthy 189mph. All that power is sent to each wheel through an eight-speed automatic gearbox, while a 48-volt mild-hybrid system allows the start-stop system to cut in from 13.7mph, and allow ‘gliding’ – or engine-off coasting – at speeds of up to 99.4mph. Cylinder deactivation technology has been integrated too, but even so the RS 7 will still return just 22.2mpg combined while emitting 261g/km CO2 when sitting on 21-inch wheels.

The engine fitted to the RS 7 gives it almost ludicrous performance, and that’s one of the most noticeable aspects of the car as a whole. Out of a corner, the RS 7 drags itself away with almost other-worldly savagery, firing you to the horizon. It means that the bends do come up thick and fast, and though you can carry speed through the corner, the car’s weight is quite noticeable. As a result, if you bring too much entry speed to the bend the RS 7 can push wide quite easily. The four-wheel-steering does help to make the RS 7 far more agile than you’d expect for a car of this size, however, and helps when navigating tighter corners, too.

The ride on our car, with its large 21-inch alloy wheels, is also a touch rough – even on the smoother parts of our test route. This could be helped, no doubt, by fitting a smaller wheel and this is something we’d advise if you want the best possible ride quality.

In a word, angry. Whereas the older RS 7 looked quite similar to the standard A7, this latest car with its 34mm and 25mm increased front and rear respective tracks and 20mm drop in ride height looks quite different to the car it’s based on.

The huge front grille, similarly gargantuan alloy wheels and dramatic rear end combine to give the car real presence, while the tapered roofline really does help to appear sleeker though make no mistake, this is a very big car.

The cabin of the RS 7 features all of Audi’s latest bells and whistles, and it feels superbly high-end. Both screens combine to give the cabin a premium feel, while all of the major materials are of high quality too. There’s a small strip of plastic underneath the air vents, however, which does feel a touch low-rent, but this is only highlighted by the excellent leather, metal and glass components used elsewhere in the interior.

Forwards visibility is good too, though that sloped roofline does mean that over-the-shoulder looks are impeded by quite a large amount.

The level of onboard kit that you get with the RS 7 is seriously impressive, with the variety of screens and displays helping to give the interior of the car a very high-end feel – though you’d expect this, given the £97,050 starting price. RS-specific sport seats with ventilation are included as standard, and though the RS 7 luggage capacity remains at 535 litres (or 1,390 litres with the rear seats folded), those rearward pews now fold 40:20:40, giving you a more flexible loading option.

New HD Matrix LED headlights are fitted as standard too, alongside the twin central screens; the upper one, which is 10.1 inches in size, gives access to media functions while the lower, 8.6-inch display gives access to heating and ventilation functions. Both operate superbly well, with the haptic feedback on each responding impressively.

It’s true that the RS 7 has often been overshadowed by the RS 6. However, if you’re after a sleeker and more undercover way of going very quickly over long distances, this is a great option. That said, given that the RS 6 is more practical and – in our eyes – slightly better looking than the 7, we’d still lean towards the wagon. Despite this and based on the way it drives and how it feels inside, the RS 7 is still an extremely competitive option and one well worth considering.