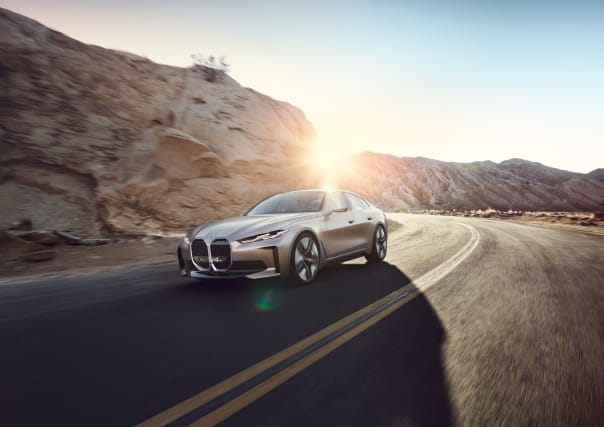 BMW has pulled back the covers on the Concept i4, previewing its upcoming rival to the Tesla Model 3.

Though featuring design details that are unlikely to make it to the road – like its dramatic headlights and wing mirrors – this is a close representation of what we can expect to see on the final car.

A large kidney grille steals the show, with streamlined bodywork flowing into a minimalistic rear. BMW says this concept shows the firm’s ‘new look’, so expect that oversized grille to be a mainstay of future cars.

Blue styling elements feature as a nod to the ‘i’ brand, as they do on the i8 and i3, and are likely to make an appearance on the road-going i4 as a result.

A simple approach is also taken in the cabin, with no buttons — save for a hazard light and basic infotainment controls. Instead, everything is housed within the large central infotainment display. This screen, which links up with a digital instrument cluster, will make its production debut on the upcoming ix3 SUV before making its way into the road-ready i4.

A combination of cloth and leather is used for the upholstery, with the latter tanned using olive leaves, said to set a ‘sustainable seal’ throughout the cabin.

Powering the concept is an initial version of the electric powertrain that will make its way into the production i4. The 80kWH unit is said to produce 523bhp, weigh around 600 kilograms and has a targeted WLTP Combined range of up to 373 miles.

Expect to see the production version of the BMW i4 early 2021, with a view to it arriving on the market later in the year.