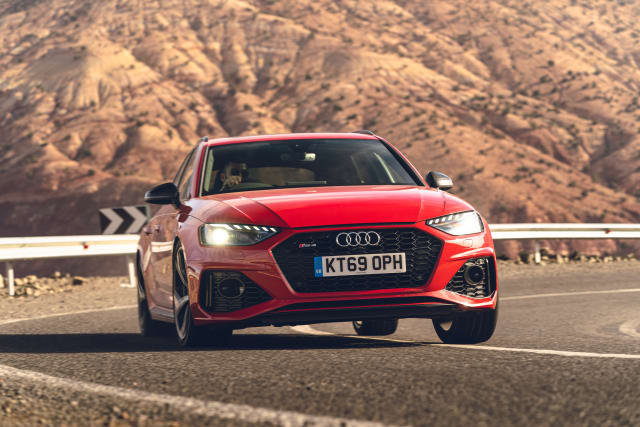 We’ve already seen how successfully Audi has reinvigorated its flagship RS 6 Avant, bringing added poise and performance to a car which was already held in high esteem. Now it’s the RS 6’s little brother – the RS 4 Avant – which is getting a bit of nip-tuck.

This is a far more understated affair, mind you, with the RS 4’s mechanicals left largely unchanged over the car it replaces. No, the edits come into force more in terms of the car’s visuals, as well as its in-cabin entertainment. We’ve been out to Morocco to find out how these changes have affected the RS 4.

As we’ve already mentioned, this is far more of a facelift than an outright new car. Whereas the RS 6 now benefits from mild-hybrid technology and a cleaner – albeit still quite thirsty – V8 engine, the RS 4 makes do with the same V6 biturbo as you found in the older car. That said, the eight-speed auto has been ‘optimised’ for better changes.

It’s outside where you’ll notice the most variation over the previous-generation RS 4. The front end has been sharpened up with larger air intakes, while the rear has been beefed-up in terms of appearance too.

With 444bhp and 600Nm of torque, the power outputs of the RS 4’s 2.9-litre biturbo V6 remain unaffected from the previous car. That’s right, there’s no bump in power and drive is sent through the same eight-speed tiptronic automatic gearbox to all four wheels through Audi’s quattro system. Audi claims 3.8 seconds for the sprint from 0-60mph, with a flat-out top-speed of 155mph – or 174mph in Vorsprung Edition cars. Official figures state that this RS 4 will return up to 29.1mpg too, while emitting 210g/km CO2 – though the latter statistic comes from older, generally less realistic NEDC testing standards.

A sport differential comes as standard too, which can alter the amount of power sent to the rear wheels to help improve cornering ability.

Though the updates to the RS 4 have been reasonably minimal, we’re quite glad about that because it still drives superbly well. There’s an inherent lightness to the car, which means that cornering is undertaken with the minimum amount of fuss – though a faster entry speed and a trailed brake can result in a pleasing amount of rotation. However, drive it neatly and the RS4 is a car which will cover ground exceptionally quickly.

Another notable aspect is the ride; despite the occasionally rutted roads that we travelled, the RS 4 maintained its composure — our car came with adaptive dampers — and failed to translate too much of that uneven surface into the cabin. The engine is punchy too, and the gearbox – now with sharper changes – works well both in manual and fully-auto modes. It can be hesitant to downshift via the paddles when you’re really pressing on, but when just driving around normally it’s very effective.

We always liked the look of the older RS 4; it managed to look purposeful enough to be worthy of the RS badge yet understated enough to appeal across the board. This latest model has done little to dispel those thoughts, with the newly-implemented air intake above the front grille representing a neat touch in terms of both adding some drama to the front end of the car, while bringing it closer into line with other Audi-group cars such as the R8 and A1.

It’s not as striking as its big brother RS 6 – the front arches are only increased by three centimeters over the standard A4 Avant – but it’s still a well-rounded design. It might have been good to see a more comprehensive series of updates over the old car, however.

Again, it’s a case of mild updates in the cabin too. The new central screen looks more appealing than it did in the older car, but it’s still not quite as well integrated as the systems you find in other Audi models. That said, the level of fit-and-finish is excellent, while the sport seats up front provide plenty of support. The steering wheel remains much the same too, albeit with the addition of a new RS button, which allows for quick access to individually adjustable driver modes.

Space in the back is about right for a car in this segment, meaning just enough legroom – even for taller passengers.

Given its place at the top of the A4 range, it’ll come as little surprise that the RS 4 comes with plenty of kit as standard. The most notable addition is the new 10.1-inch infotainment screen which sits in the centre of the dashboard. It’s more integrated into the overall cabin design than before, but still looks a touch perched atop the dash, so doesn’t look quite as seamless as the systems in other Audi models. The Virtual Cockpit system ahead of the driver remains, and it remains excellent, too.

Audi’s excellent Matrix LED headlights come as standard too – they’ve been redesigned for this model as well – alongside 19-inch alloy wheels. Plus, the RS 4 still ticks the boxes when it comes to practicality, which it needs to as a performance estate car. As such, there’s 495 litres of seats-up space, rising to 1,495 litres with those seats folded down.

The RS 4 Avant remains one of the best compact estate cars around. The small updates brought with this facelift have only helped to sweeten the deal and help to strengthen the RS4’s appeal as an outright package.

As a day-to-day driver, we can think of few that can tick the boxes quite as well. Though the interior may lag a touch behind rivals – despite the update – the RS 4 still feels like a car which you’d happily get behind the wheel of time and time again.