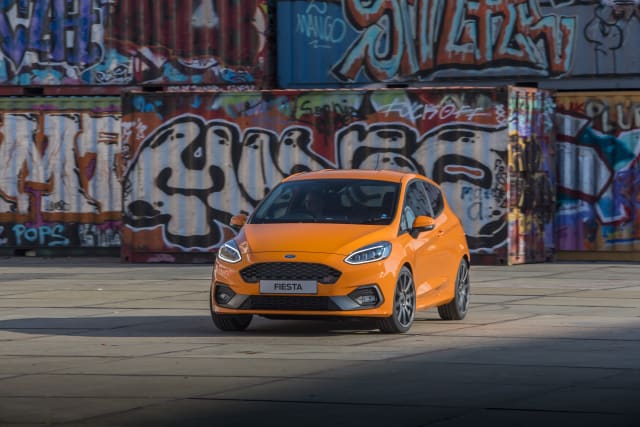 How do you improve on perfection? That’s a question Ford has posed to itself with the incredibly orange machine you see here.

It’s widely regarded that the Fiesta ST is the benchmark for the modern hot hatch. Though not devastatingly quick, the base car is an absolute riot of a machine — a hooligan of a terrier that’s desperate to be chucked into any roundabout and country lane at full velocity.

There’s little to complain about, but this Fiesta ST Performance Edition aims to improve the package further with a few extra goodies. We find out if that’s a job well done.

This is a showcase of all the best bits Ford Performance has to offer for the Fiesta ST. The core product remains the same — in fact, the engine is untouched — but some under the skin tweaks come along with incredibly visual ones too.

It’s based on the ST-3 trim level with the otherwise optional Performance Pack included, which brings a Quaife limited-slip differential, launch control and shift light indicators. On top of that, this car is sporting a coilover suspension kit that’s said to have been honed at the Nürburgring along with 18-inch Ford Performance wheels that are seven kilograms lighter overall than the standard car’s items.

Finally, there’s that blink several times and you still won’t miss it ‘Deep Orange’ paintwork that’s exclusive to the Performance. Oh, and only 600 examples are to be made.

No changes have been made to the ST’s 1.5-litre turbocharged three-cylinder engine, not that any were needed. It produces 197bhp and 290Nm of torque, dumped at the front wheels via an incredibly sharp six-speed manual gearbox.

As a result, 0-60mph comes in 6.3 seconds with a top speed of 144mph possible. Ford claims the car can return 40.4mpg on the WLTP Combined cycle with CO2 emissions weighing in at 136g/km.

Excitement is not something this setup lacks. The way it delivers power is impressively brutal, with a strong punch delivered right through the rev range and its gearbox one of the slickest around — all while the dinky turbo unit lets out a roar that engines twice the capacity and cylinders would struggle to match.

That characterful engine links up perfectly with one of the most playful chassis around in the regular Fiesta ST, and these small tweaks have done nothing to compromise that. It’s still keen to be chucked into roundabouts, country lanes and any slight turn with ferocity and deliver a somewhat scrabbly but sensationally fun experience.

The addition of Ford Performance dampers in the setup we’re provided with here (those with some tools can manually adjust settings) offer an ever so slightly more clinical drive than the standard car but while retaining all of the joy in the process.

It hasn’t led to a huge compromise in comfort and refinement, either. Drive the Performance back-to-back with a standard ST and you’re likely to notice a bit of a firmer ride but nothing ruinous.

Though the Ford Fiesta ST is arguably somewhat subtle in its standard guise, this Performance Edition is anything but.

Each of the 600 examples slated for production (with all coming to the UK) are finished in that immensely eye-catching ‘Deep Orange’. It’s not something you’re going to lose in a car park, or struggle to find in a dark night.

It turns heads too, and maybe that’s something you’re after but if not, opting for the extra goodies in the options list of the standard car may be a better bet. This particular road tester loves it though, and its new alloy wheels do a world of good too.

It’s near impossible to tell there’s anything out of the ordinary with the Fiesta ST Performance Edition compared with the standard car based on the interior alone, save for a little bit of exposed orange bodywork peeking through.

No changes have been made, meaning its ST seats, slick-looking gearstick and branded steering wheel are all present as usual. Otherwise it continues to be able to seat five occupants (though adults may struggle in the back) and its boot remains at a respectable 292 litres in capacity.

The driving position is spot on too, leaving you low enough in the car to fit the racy nature of the car without being uncomfortable to hop in and out of while the large windscreen and huge windows that are a standard fixture of three-door cars make for impressive visibility.

As it’s based on the ST-3, the Fiesta ST Performance Edition is packed with the same goodies as any range-topping version of the car. That means standard highlights include its LED headlights, power-folding door mirrors with puddle lights, heated front seats and heated steering wheel, cruise control, and an eight-inch display housing Ford’s excellent Sync3 infotainment system, which also supports Android Auto and Apple CarPlay.

There’s also a Bang and Olufsen audio system that’s equally as appropriate to the outlandish nature of this chavtastic take on the ST, along with the aforementioned ST Performance Pack.

All the other goodies (except for the paint), such as its coilovers and wheels, can be added to a standard ST-3 model for less than the £26,495 Performance Edition. So, you’ll have to really like the paint to opt for this edition.

It’s also a £2,500 premium over a regular ST-3 before options as well, and the core driving experience of the standard car is still 99 per cent of this one — so it’s hard to justify paying the extra. That said, if you’re going to upgrade to coilovers and new wheels anyway this may be a good, easy option for that.

The hot hatch crown firmly remains in the court of the Ford Fiesta ST, and this Performance Edition only serves to add more shine to its jewels.

For the perfect blend of grin-inducing yobbery, a bit of practicality and even a reasonable fuel return, the ST manages to do it all.

That said, the Performance Edition doesn’t really add enough to the package to make this the go-to model. We’d say put your money into the regular ST-3 if you’re planning to leave it exactly as it left the factory, though those wanting to add the mechanical tweaks of the Performance Edition anyway are well catered for here. There’s the added bonus of this being a limited-edition fast Ford, too.

The Learmousine, a 42-foot jet turned into a street-legal limo, is for sale

The CUPRA Ateca Limited Edition in the Swiss Alps