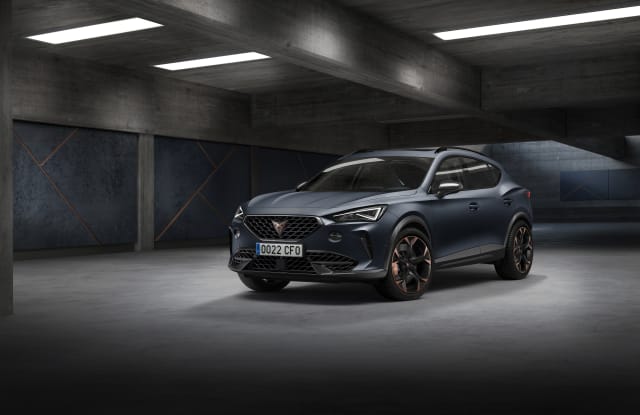 Cupra has pulled the covers off the first model designed from the ground up for the brand — the Formentor.

Unlike both models previously from the firm, the long on-sale Ateca and recently revealed Leon, the Formentor is not derived from a vehicle in parent firm Seat’s line-up.

It takes on a look reminiscent of the Cupra Leon, with angular headlights flanking an aggressively designed front fascia, while the rear features a light bar that stretches the width of the car. The Formentor is also described as a ‘coupe crossover’, an ever-growing class of SUV-like cars with tapered rooflines, as is the case here.

The Spanish firm is often pitched as a performance arm of Seat, and the Formentor has powertrains appropriate for the name. A pure-petrol 2.0-litre turbocharged four-cylinder engine can be had in the car, delivering 307bhp and 400Nm of torque to all four wheels via a seven-speed automatic gearbox.

Alternatively, a plug-in hybrid option is available too. This sees a 1.4-litre petrol engine linked up to an electric motor combining to deliver 242bhp and 450Nm of torque with the same gearbox. No word yet on performance figures for either configuration, but Cupra claims the plug-in hybrid can cover 31 miles on electric power alone.

Key to managing that power is the Volkswagen Group’s Dynamic Chassis Control (DCC) system. This allows a number of settings to be altered depending on the driving conditions, with ‘Comfort’, ‘Sport’, ‘Cupra’ and ‘Individual’ modes all included.

Exact UK specifications for the Cupra Formentor are yet to be confirmed but playing a key role in the cabin is a 12-inch infotainment system supporting Apple CarPlay wirelessly and Android Auto via a USB-C connection.

Driver assistance features set to be included are adaptive cruise control with traffic sign recognition, blind spot detection and ‘Exit Assist’ which will warn occupants of oncoming vehicles or pedestrians when opening doors.

Expect to hear more on the Cupra Formentor as Q4 2020 deliveries approach.