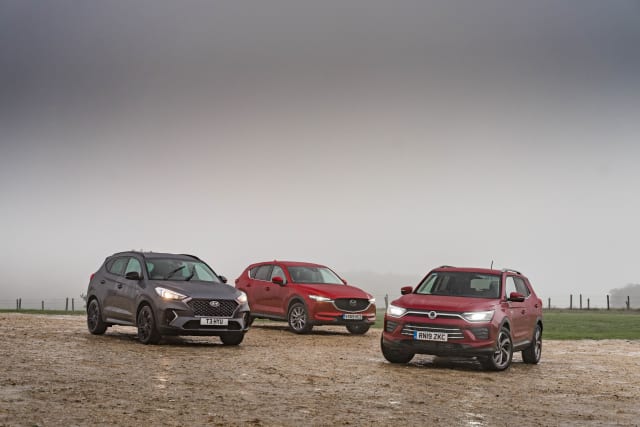 Look at the roads today and you’ll soon notice the influx of high-riding crossovers in the UK. Mainstream manufacturers would struggle to survive without them, and for some, they’re now the bread and butter of their line-ups.

That’s true for Mazda, which now has three crossovers in its range, which account for a huge chunk of sales – the largest CX-5 being our interest here – as well as Hyundai, which has the Tucson as the best-selling model in its range.

And then there’s SsangYong – a South Korean marque that’s still quite unknown to many car buyers, and one simply specialising in crossovers, SUVs and pick-ups. It’s always been a bit behind the opposition in terms of image, interior quality and refinement, but could the firm’s new Korando be about to change that?

Let’s start with the freshest model here – the SsangYong Korando, which has always sold in relatively low volumes. In a past life, it was the choice of those not concerned about image, but rather those who put value and towing ability above all else.

But no longer. Here we have a new stylish version boasting a vastly improved interior and tech that can embarrass many of its rivals – its 10.25-inch digital cockpit being a particular highlight.

As for the other two cars, the Mazda CX-5 is the oldest car here. That said, constant updates mean you can’t really tell, with the latest revision introducing Apple CarPlay and Android Auto smartphone mirroring, as well as a flagship GT Sport Nav+ trim level.

Last but not least is the Hyundai Tucson, which saw a big update in 2018 – bringing in a more stylish look and mild-hybrid engine technology. More on that later. Here we’re sampling it in the sporty-looking N-Line trim level.

While the tables are turning more towards petrol vehicles, in mid-size crossovers like these, diesel is still a great choice – with better torque making acceleration less lethargic. The Hyundai’s unit is undoubtedly the cleverest of this trio – featuring a 48-volt battery that can harness lost energy, and then use it to provide additional torque and reduce the strain on the 134bhp 1.6-litre engine, which comes paired to a six-speed manual gearbox. The tech also brings light fuel savings, as well as cuts to CO2 emissions, with the Tucson emitting just 113g/km, next to the Mazda’s 128 and the SsangYong’s 144.

The Korando features a 1.6-litre diesel engine delivering the same 134bhp as the Tucson. Unlike the other two cars here, it features four-wheel-drive, which adds additional weight but compensates for that with extra off-road ability – something SsangYong has always been good at. It’s also the only model with an automatic transmission.

The CX-5’s 2.2-litre diesel is significantly greater in capacity, and while only delivering slightly more power at 148bhp – it’s noticeably the quickest in this company – shaving more than two seconds off the Korando’s 0-60mph time of 11.8 seconds at 9.7 seconds (the Tucson splits the two at 11 seconds dead). Mazda has some of the best gearboxes around, too, and the CX-5’s six-speed manual transmission is no exception.

In terms of fuel economy, they’re all roughly on par, with each managing between 45 and 50mpg, though the CX-5 just about achieves the best figures.

All three of these crossovers nail the basics; with comfort and ease of driving being at the top of most buyers’ shopping lists, it’s pleasing that all these models deliver.

The Korando has undoubtedly taken a huge leap forward, and thankfully the agricultural and gruff feel of the old model has vanished into the distance. This new engine is smoother and torquier, while general comfort and refinement has drastically improved, but goodness it needed to. The one main hiccup is the gearbox, which can feel jumpy and hesitant. It’s not helped being tested alongside the CX-5 and Tucson’s transmissions, which are some of the best in this class.

While this Tucson might be all dolled up in N-Line trim, with this diesel engine, there are no mechanical changes. Impressively, even on these large 19-inch alloy wheels, the ride never feels uncomfortable, while it’s easy to place through the corners with little body roll.

But it’s the CX-5 you should be looking for if you value driving enjoyment – offering precise steering, a sharper throttle response and the punchiest engine here. Yet, remarkably, it remains comfortable and refined, making it a superb all-rounder from behind the wheel.

How do they look?

We’ll begin with the Tucson, which in its standard guise has all the excitement of a cheese sandwich. But when in N-Line trim, Hyundai slaps on some black 19-inch alloy wheels, gives it some revised bumpers and adds additional gloss black styling. And the result is remarkably convincing, as it genuinely looks as if there could be 300bhp under the bonnet, rather than 134.

SsangYong’s all-new Korando has also been radically changed. Gone are the frumpy looks of old, and in is a much more modern, sharper-looking version. Distinctive LED rear lights are a favourite detail, while the Ultimate version we’re testing here also gains smart 19-inch alloy wheels.

Then we have the Mazda, which, in our eyes at least, is the most stylish of the lot. Part of what the Japanese firm calls its ‘Kodo design’, it features a large grille and LED lights that run into chrome trim at the front, giving the model a distinctive presence on the road.

All three cars here are ideal family-sized crossovers – each offering five seats, generous room in the back for adults and good-sized boots.

Mazda has its ergonomics perfected on the CX-5, with a seven-inch infotainment screen being operated by an easy-to-use rotary dial and all buttons and knobs falling within easy reach. However, it’s the one part of the CX-5 that’s showing its age as it’s lacking the modernity of rivals.

Had we been testing a regular Tucson, it’s fair to say the cabin is somewhat bland. But a few sporty touches – including leather and suede sports seats, an N-Line steering wheel and red stitching – really help to elevate the cabin. Interior quality is hard to fault, too, while the eight-inch touchscreen is simple to use, helped by surrounding exterior buttons for short-cuts.

Lastly the Korando, which is yet again another example of just how far this brand has come. Once known for having a cheap-feeling and old-fashioned interior, this new Korando looks the most techy and modern out of all the cars here. The fully digital cockpit is a particular highlight as it’s slick, modern, and gives the Korando a particularly premium feel.

In terms of spec, we have quite a mash-up here, with mid-range versions of the Tucson and CX-5, and the flagship trim and engine of the Korando.

Each model feels well-equipped, though it’s the SsangYong, perhaps unsurprisingly, that feels the most lavish in ‘Ultimate’ trim – featuring 19-inch alloys, ventilated front seats, a heated steering wheel and a nine-inch touchscreen. It sure leaves you wanting for very little, though at £31,995, it’s the most expensive here. On the plus side you do get a seven-year warranty.

Contrast this to the Tucson N-Line, and sure, it gets considerably fewer luxuries, but with standard kit still including 19-inch wheels, climate control, a reversing camera and heated front seats, it ticks all the right boxes, and costs just £27,795.

The CX-5, meanwhile, in mid-spec Sport Nav+ trim, is a bit more expensive at £30,700, though you have to consider it is a slightly larger car with a more powerful engine. For the price you get LED headlights, an electric tailgate, a Bose sound system and adaptive cruise control.

Choosing between these models is harder than you might think – something which in itself shows just how far SsangYong has come with its new Korando.

This is a model that is hardly distinguishable next to its lacklustre predecessor, thanks to its stylish new look, improved road dynamics and interior, which leads the way for technology here. But this diesel-automatic configuration doesn’t show the South Korean at its best, while lesser trim levels feel like better value for money.

Next is the Hyundai Tucson – a model that doesn’t disappoint in any area, and in this N-Line trim, manages to be both stylish and good value for money. But while it might be good across the board, it fails to excel in any real area.

That’s where the CX-5 just pips it. Sure, it’s the oldest car here, and its interior feels that way. Yet this is redeemed by having the strongest engine, and also by being the best to drive by far, while also looking the part. Add in the fact it’s the most spacious car here and also decent value, and it seals the victory quite comfortably.