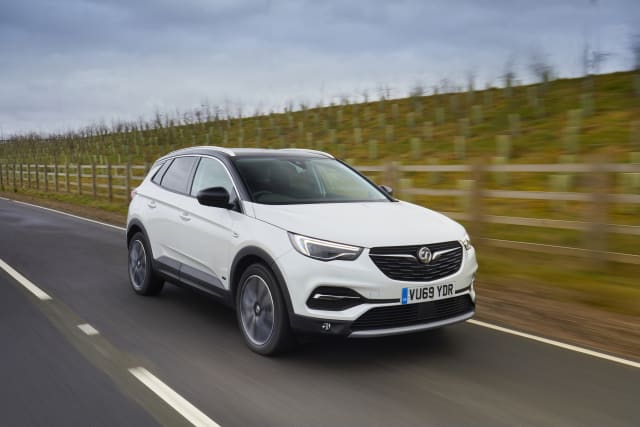 Plug-in hybrids are making more sense for business customers as time goes on. With Benefit-in-Kind ratings going down from April, plug-ins will be cheaper for companies to run and that means cars like this, the Vauxhall Grandland X Hybrid4, will be ripe for the picking.

Based on the mid-sized SUV, this is the first Vauxhall plug-in hybrid and joins the Corsa-e EV in the electrified line-up – although many are certain to follow. But with the Grandland X not being the best option in its segment, can this PHEV iteration change its fortunes?

There’s not much different here compared to the standard Grandland X, hybrid powertrain aside. To complement the new powertrain though, Vauxhall has fitted the model with selectable driving modes.

‘Hybrid’, ‘AWD’, ‘Sport’ and ‘Electric’ settings are packed in here, while an ‘e-Save’ option allows you to save the battery power you have to then use around town. Braking regeneration is also in play, which means you can recoup energy from braking and deceleration that can then be used by the electric motors.

Making up the internal combustion side of the hybrid powertrain is a 1.6-litre four-cylinder petrol engine that develops 197bhp on its own, while two electric motors — one on each axle — combine to develop an additional 108bhp.

Working together, the Hybrid4 has 296bhp at its disposal with that power sent to all four wheels via an eight-speed automatic transmission. As a result, the car is capable of 0-60mph in 5.9 seconds with a 146mph top speed possible.

Vauxhall claims the car can return up to 225mpg, though our mixed test route left us with a 117mpg readout — albeit that’s still pretty impressive. The electric power allows for up to 35 miles of zero-emission driving, which can cover most commuting distances.

It’s safe to say the Grandland has never been the most exciting car in the world, and no injection of performance or power would really change that. The steering lacks feel but is direct enough, while the brakes can be sharp. Also, when pressing on a bit more, the suspension feels bouncy and like the car can’t quite handle it.

But there are things to like about the Grandland too. The eight-speed gearbox is smooth while, when working on its own, the petrol engine doesn’t encroach into the cabin or sound too strained.

On the top spec Ultimate Nav model we tried, it comes with 19-inch alloy wheels that transferred a lot of road imperfections through the car, so you should opt for smaller units to get more comfort.

Vauxhall has decided not to mess with the looks of the Grandland upon gaining a hybrid powertrain. It’s not one of the stand-out options on sale, but it certainly isn’t a bad looking car. With plenty of shiny metals highlighting the grille and underscoring the roofline, there are some premium flourishes here.

On the Ultimate Nav model we tried, the 19-inch alloy wheels complement the rest of the car and with the contrasting roof the overall package looks good. The sharp daytime running lights also continue the lines of the grille, helping the Grandland have a distinctive look.

When you step inside the Grandland X, don’t expect the most enthralling experience. It’s quite plain, with black soft-touch materials used throughout, but all feel up to a good standard. In fact, it’s very difficult to find any scratchy plastics.

One attribute of the Grandland we aren’t a fan of is the rear space. Especially for taller adults, the back doesn’t allow for much head or legroom, which on longer journeys would become quite cramped. The boot isn’t that large either, with the squarely-shaped 390-litre space smaller than the majority of its closest rivals.

The eight-inch touchscreen hosts most of the functions you need, and although the e-Save menu can be difficult to navigate while on the go, it remains a clear support system to use.

We got behind the wheel of the top-spec Ultimate Nav model, and with it you get almost all you really need in a car. An eight-inch infotainment touchscreen is the centrepiece of the cabin which comes with smartphone connectivity and Bluetooth, with wireless charging, parking sensors and a reversing camera.

With many of the world’s manufacturers heading towards electric power, this is a good stepping stone for Vauxhall. The main issues from the standard car still remain, like overall practicality and driving feel, but this hybrid addition to the line-up is a positive one.

The electric range is good, and the recuperation setup helps provide even more zero-emission driving. The 296bhp can overwhelm the chassis at times, but when used in moderation it offers a pleasant experience.

Going for the model we drove would be an expensive decision, so if you’re interested look towards the lower end of the scale. With a front-wheel-drive version of the hybrid soon to join its four-wheel-drive counterpart, customers will have good options to choose from in the Vauxhall stable.