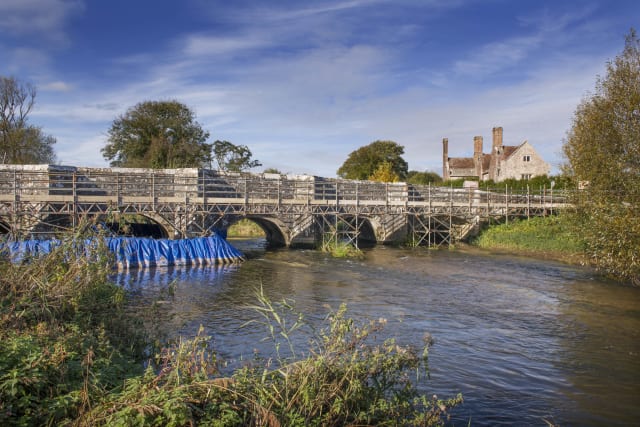 More than 3,000 council-owned bridges in Britain are unable to carry the heaviest vehicles on our roads, new figures show.

The estimated cost to bring all the substandard bridges back up to perfect condition is £1.12 billion, according to analysis of 2018/19 data by motoring research charity the RAC Foundation.

Many of these structures are subject to weight restrictions, while others are under programmes of increased monitoring or even managed decline.

Some are substandard because they were built to earlier design standards, while others have deteriorated through age and use.

Many bridges have been affected by flooding and hit by debris carried along by rivers in recent weeks.

Between them, local authorities say they would ideally want to bring 2,084 of them back to full carrying capacity.

But budget constraints mean they anticipate that only 359 will have the necessary work carried out on them within the next five years.

The analysis is based on figures provided by 203 of Britain’s 210 local highway authorities, which manage 71,505 bridges.

It was carried out in partnership with Adept, a group representing local authority bosses responsible for transport and other sectors.

RAC Foundation director Steve Gooding described the conditions of road bridges as a “canary-in-a-coal-mine indicator for the health of the highway network as a whole”.

He said: “While our survey shows a marginal year-on-year improvement, it still reveals that, while the number of structures highway authorities expect to bring up to standard in the next five years is in the hundreds, the number they’d like to restore to manage traffic demand is in the thousands.

“The recent closure of a key bridge in Nottingham shows just how bad the traffic impact can be when a structure on a key distributor route is found wanting.

“And, as recent storms have demonstrated, our road infrastructure – including bridges – is under attack not just from the ever-growing volume of traffic but from the elements.

“Highway authorities desperately need the money and the engineering expertise to monitor and ensure our highways – our most valuable publicly-owned asset – are properly maintained and kept open for business.”

Kevin Dentith, who chairs the Adept national bridges group, said: “Alongside the misery recent rain and flooding has brought to householders and businesses, many highway authority bridge owners will be fearful of what they find when the waters recede.

“The vast volumes of water – and the debris they carry with them – will have pummelled our road bridges, some of which are already in a fragile state.

“With every sign suggesting that these extreme weather events will become more common, it is inevitable that more money will be needed to keep our bridge stock open for traffic, and hence our towns and cities open for business.”

David Renard, the Local Government Association’s transport spokesman, said: “This study underlines the chronic need for more investment in local roads. The backlog of repairs on our existing highways infrastructure as a whole currently stands at over £9 billion and it would take 10 years to fix.

“Flooding events in recent weeks have shown how vital bridges are in linking together communities and enabling shoppers and local traders to go about their business. They are of critical importance to our national economy.”

Sat-nav manufacturer TomTom said the closure of a bridge in Nottingham due to corrosion damage made an evening rush-hour more congested than any other city in the world.

The bridge is part of the A52 and is used by tens of thousands of motorists every day.

It has been partially reopened, but is not expected to be fully operational before the end of the year.

West London’s Hammersmith Bridge has been closed to motor traffic since April 2019 because of cracks in its pedestals.