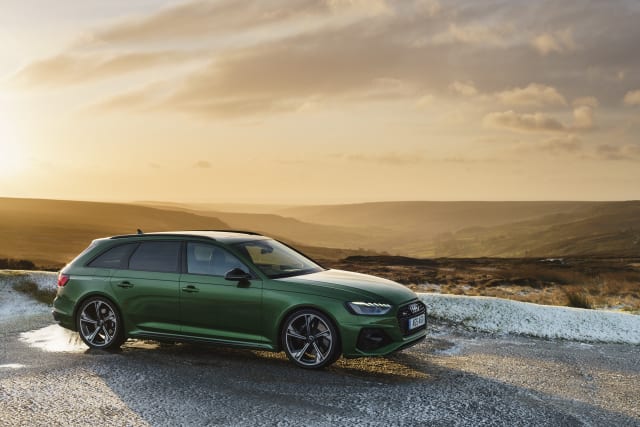 There was a time long ago when car buyers had to choose between performance and practicality. However, these days, you can have both – rapid pace and loads of space for people and luggage.

If you're looking for something that can swallow everything you need for a weekend but also get your heart beating faster every time you push the throttle, we've put together a list of some of the best performance estates in the business with a budget of £80,000.

When you're thinking of fast load luggers, the first that come to mind are Audi's RS Avant models. The pinnacle of these is the RS6, but to keep within our budget the similarly excellent but slightly less powerful RS4 is the one to go for.

It's just been facelifted to get the sharper styling and updated technology seen across the A4 range, while under the bonnet it has a 2.9-litre V6 making 444bhp. Thanks to four-wheel-drive acceleration is brisk, with a 0-60mph time of 3.9 seconds, while the top speed is 174mph.

Mercedes loves to fill a niche, and here's yet another example of that. If you're looking for a ludicrously fast hot hatch but feel like you need a bit more space, there's now a shooting brake version of the coupe-saloon variant of the A Class hatchback. Still following?

This model gets the clever technical gubbins from the A45 hot hatch, with the headline-grabbing 2.0-litre turbocharged petrol engine available with either 377bhp or 416bhp. In shooting brake guise, you still get drift mode, but also a 505-litre boot, for the ultimate practical hooligan combo.

The old Ford Focus ST was a bit of a disappointment, because it just couldn't put its power into the road making it frustrating to drive fast. Despite that, in estate guise it actually made for a decent affordable fast estate.

The latest generation ST has moved the game on considerably, now staking a claim to be one of the best hot hatches on the market. It's not quite as affordable as before, but it's still considerably less expensive than most of the cars in the list while still being fun and capable.

The old Mini Clubman JCW was good if a little underpowered, but that's all been solved with the new one, which gets the 2.0-litre turbocharged petrol engine from the BMW M135i. That means you now get 302bhp and a 0-60mph time below five seconds.

Alongside this bump in performance you also get all the benefits of the regular Clubman, which is an excellent interior, loads of space in the back, and the quirky rear door opening. At just under £35k, it's actually pretty good value too, usefully undercutting rivals – surprising, given Mini's premium badge appeal.

It's not just petrol power that can deliver fast estate thrills, as this new introduction to the BMW 3 Series line-up proves. Badged M340d, it uses a 3.0-litre straight-six diesel engine used elsewhere in the range, but here tuned up to 335bhp and paired with a small electric motor.

And with a 0-60mph time of 4.4 seconds, that means it's the fastest diesel estate on sale in the UK right now, all while promising more than 50mpg.

If you know your fast BMWs, you'll know Alpina. What started out as a tuner of the firm's cars is now technically a car manufacturer in its own right. It takes standard production BMWs and makes them look smarter and go faster.

Including the Porsche in this list is a bit of a stretch, because some versions of the Sport Turismo cost well in excess of £100,000. However, it is possible to get an 'entry level' version for about £75,000, and it's no slouch.

With four-wheel-drive and almost 330bhp, it'll go from 0-60mph in 5.3 seconds, and you can knock an extra couple of tenths off if you opt for the Sport Chrono Package. It's not the fastest in this list, but it's the one with the best interior and boasts the most badge appeal too.

How can I get my car winter-ready?