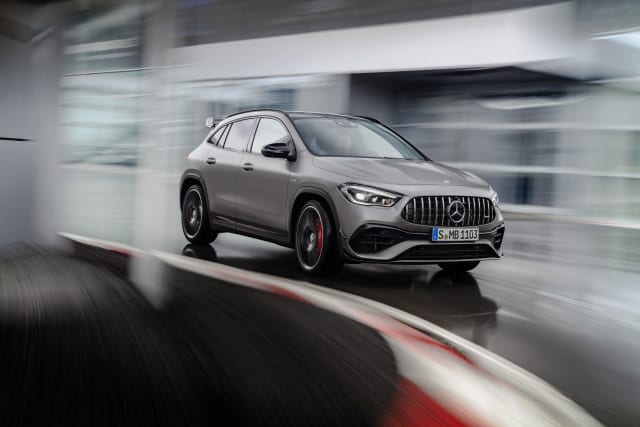 Mercedes-AMG has revealed a second-generation version of the GLA 45, now boasting as much as 415bhp.

Based on the compact car underpinnings of the A Class and its various derivatives, the AMG GLA 45 sports the same 2.0-litre turbocharged four-cylinder engine as its A 45 sibling.

That 415bhp is found in S variants of the car, also producing 500Nm of torque. That output is delivered to all four wheels via an eight-speed dual-clutch gearbox, resulting in a 0-60mph time of 4.1 seconds and a top speed electronically capped at 168mph. A lower-output version of the car will be available in some markets, though the UK will only receive the S.

There’s more at play here than just a punchy engine, though. AMG engineers have fiddled with the all-wheel-drive setup to optimise the way that power is deployed, with ‘AMG Torque Control’ its solution. This effectively uses electronically controlled clutches in the rear differential to selectively put power down to each rear wheel as and when needed.

A total overhaul of the GLA’s suspension has also been made to help cope with the extra demands, while large six-piston brake callipers up front and single-piston units at the rear have been introduced alongside ventilated discs for maximum stopping performance.

Selectable drive modes also play a role. These include ‘Comfort’, ‘Sport’ and ‘Sport +’ as well as ‘Slippery’ for rain-soaked conditions, ‘Race’ for a track-oriented setup and ‘Individual’ for full customisation.

Exterior tweaks have been made to match those under the skin as well. A slotted ‘Panamericana’ slotted grille sits atop a more aggressively styled front bumper while a quad-exit exhaust at the rear has been introduced. There’s also an eye-catching rear wing stuck on top, with 20-inch alloy wheels rounding out the package as standard, though these can be swapped out for 21-inch units.

Inside the GLA 45 S, a Nappa leather and Dinamica microfibre-wrapped AMG steering wheel has been introduced along with AMG-specific menus and themes for its digital displays. The firm’s MBUX infotainment system with a ‘Hey Mercedes’ voice assistant features, too.

UK pricing and specifications for the Mercedes-AMG GLA 45 S have yet to be confirmed, though expect to hear more ahead of an April on-sale date.