Facelifted Hyundai i30 revealed with mild-hybrid tech and improved equipment 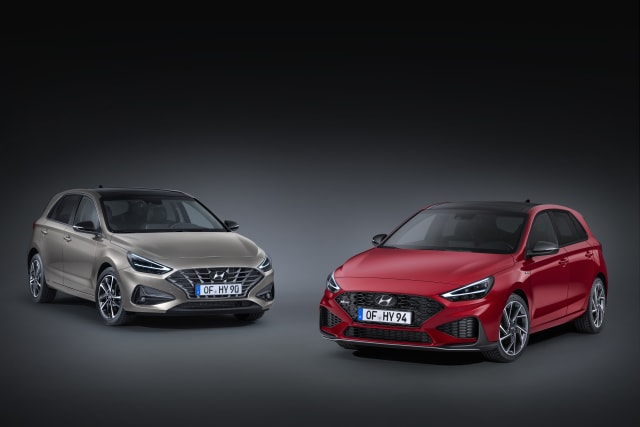 Hyundai has pulled back the covers on a refreshed version of its compact i30, with the model sporting a new look and mild-hybrid technology.

Though certainly an evolutionary design rather than revolutionary, the front of the car has been treated to a set of new headlamps which see V-shaped daytime running lights integrated within the units.

A wider grille has been added too, while the rear sees a revised bumper design and new LED combination taillights. Rounding out range-wide visual changes are the introduction of fresh 16- and 17-inch alloy wheels styles.

N Line variants of the i30 have seen further visual changes too. A much larger lower section of the grille is in place on this racier trim level, flanked by enlarged side openings which are said to improve the car’s aerodynamics. New 18-inch alloy wheels are available as well.

Under the bonnet, mild-hybrid technology has come to the entry-level 1.0-litre and range-topping 1.5-litre petrol units. This 48-volt setup works on both to cut down on engine-on time when coming to a stop in a bid to reduce fuel consumption and emissions.

A seven-speed dual-clutch automatic gearbox is also now available optionally on the 1.0-litre unit, while a six-speed manual continues to be offered as well.

As for the cabin, a ‘Pewter Grey’ colour option has been introduced while sitting at the centre of it all is a new 10.25-inch infotainment display with support for Android Auto and Apple CarPlay. A seven-inch digital instrument cluster also replaces traditional dials and gauges where fitted, though it’s not yet clear if this will be a standard-fit item or a cost option.

More safety features have been added as well in the form of lane following assist, rear collision avoidance assist and leading vehicle departure alert — the last of which warns the driver when the vehicle ahead has started moving forward if they don’t react within a set timeframe.

UK pricing and specifications have yet to be confirmed for the refreshed Hyundai i30, which will be available in hatchback, ‘Wagon’ estate and ‘Fastback’ saloon forms, but expect to hear more following the model’s public debut at the Geneva Motor Show on March 3.