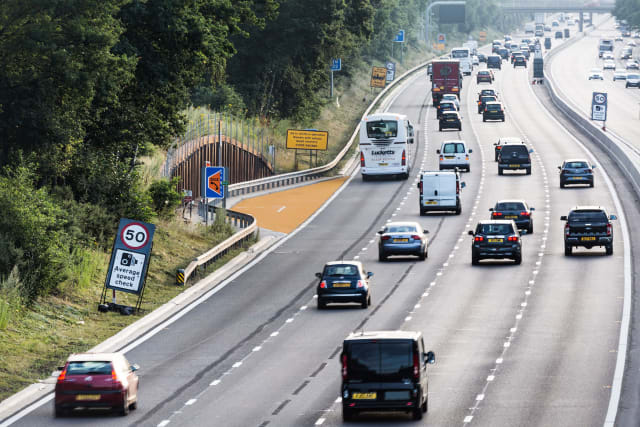 Vehicles broken down in live lanes on a 13-mile stretch of smart motorway caused more than 900 hours of delays over a period of two years and three months, figures show.

Some 2,227 incidents involving vehicles that failed to reach an emergency refuge area (ERA) on part of the M3 in Surrey were recorded between August 1 2017 and October 31 last year, according to AA analysis of Highways England data.

This caused lane closures for 945 hours to protect vehicles stranded in live lanes.

During the same period, 271 crashes led to lanes being shut for an average of one hour and 11 minutes.

Smart motorways were developed to increase capacity and reduce congestion by converting the hard shoulder into a live running lane, rather than the more costly process of widening roads.

Fears have been raised that this has created a safety hazard, with some drivers hit from behind and killed after being unable to reach an ERA, which are up to 1.6 miles apart.

The Department for Transport is carrying out an evidence stocktake into the safety of the roads.

The AA hopes this will lead to a series out measures such as increasing the frequency of ERAs and retrofitting the most effective systems for detecting vehicles stopped in live lanes.

AA president Edmund King said: “One of the main selling points of smart motorways was to ease congestion but the number of live lane stops and lane closures is undermining its effectiveness.

“While some lane closures are inevitable, many of the 2,200 breakdowns could have found a safer place to stop if there were more emergency lay-bys.

“Tailbacks build at a mile a minute, so lengthy lane closures mean unnecessary jams are created which adds to congestion.

“This further highlights the need for more emergency refuge areas.”

A Highways England spokesman said: “The all lane running smart motorway on the M3 between Farnborough and the M25 opened in 2017 and has increased capacity by a third on one of the busiest roads in the country, successfully reducing stop-start congestion.

“This section of the M3 experienced congestion on a daily basis before the upgrade, and the number of delayed journeys has now dropped significantly, improving reliability overall. This adds up to more, better journeys being made on the M3 between junctions 2 and 4a.”