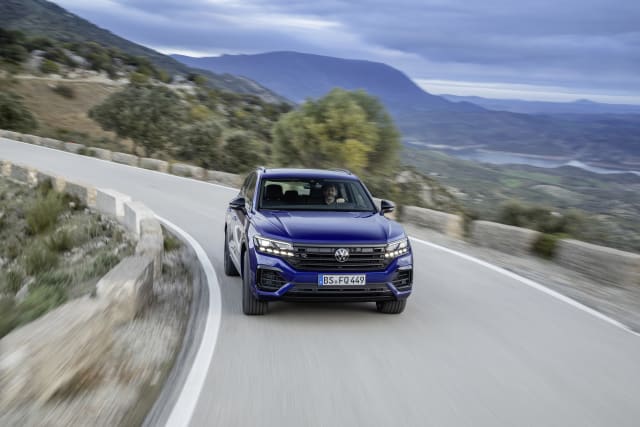 Volkswagen has revealed its range-topping Touareg model – the Touareg R.

Designed with both performance and efficiency in mind, this new model is the first R-badged car to be available as a hybrid.

Underneath the bonnet sits a turbocharged V6 engine which is linked to an electric motor and a 14.1 kWh battery. Combined, they produce 455bhp and 700Nm of torque.

Power is sent to all four wheels through an eight-speed automatic gearbox, with a central differential lock acting as a transfer box for the flow of drive between front and rear axle.

The Touareg R starts up on electric power alone – providing there is enough charge to do so – and can travel up to 87mph on electric power. Volkswagen hasn’t stated how far the Touareg R will manage on plug-power alone, though the German manufacturer states that it will cover ‘typical commuter distances with zero emissions’.

A variety of different operating modes allow the driver to select the hybrid functions of the car, with the choice between hybrid and all-electric E-Mode available. Standard settings of Eco, Comfort, Normal, Sport and Individual are also on offer, while Touareg R cars fitted with the optional off-road package also get Gravel and Sand modes.

Inside, the Touareg boasts a 12-inch digital cockpit screen alongside a 15-inch infotainment screen. This hybrid version receives black leather upholstery with ‘Crystal Grey’ decorative stitching as standard, too.

It’s also the only plug-in hybrid SUV with trailer assist, which can move a trailer backwards into a parking space or narrow gateway almost automatically and, thanks to the hybrid powertrain, this process can be undertaken almost silently.

The Touareg R is set to enter the market in the second half of 2020 and is set to make its world premiere at the Geneva International Motor Show next week.