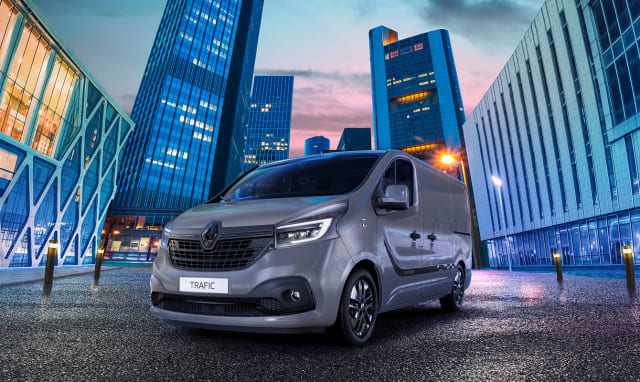 Renault has updated its Trafic van range with a new Black Edition, which adds unique styling touches and extra equipment as standard.

As the name might suggest, the majority of these aesthetic upgrades are black, including the alloy wheels, grille surround, and the ‘styling blade’ in the lower grille. The paint job doesn’t have to be black, though, with grey and white also available, including body-coloured side mouldings.

There’s also an optional bodykit with a lower front bumper, side skirts and roof spoiler to give it a sportier appearance.

Parking the Trafic Black Edition is made easier thanks to a reversing camera included as standard, in addition to the rear parking sensors.

There is a choice of two 2.0-litre turbocharged diesel engines, one with 143bhp and another with 168bhp. The former returns 52.3mpg and emits 188g/km CO2, while the latter offers 51.4mpg and 187g/km. Both can be had with either a manual or automatic gearbox.

The Black Edition also benefits from the updates introduced to the rest of the Trafic range last year, such as full LED headlights and a redesigned front grille on the outside, and a more car-like dashboard with integrated Apple CarPlay and Android Auto inside.

Prices for the Renault Trafic Black Edition start at £27,950, with order books opening in April 2020.