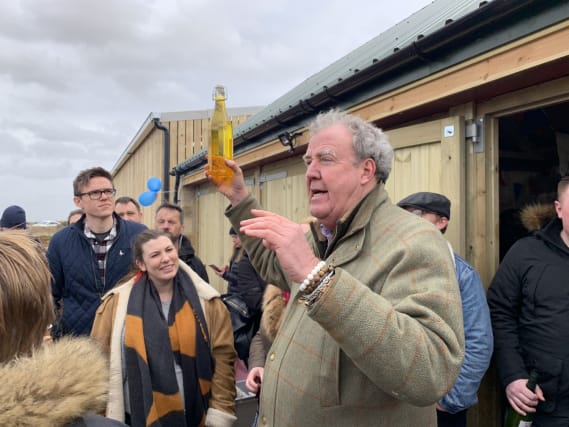 TV presenter Jeremy Clarkson swapped Porches for potatoes today (February 22) as he threw open the doors to his farm shop for the first time.

At the Squat Shop – named after his farm Diddly Squat – located near Chipping Norton, Cotswolds, the Grand Tour host sold potatoes, raffled off water in yellow bottles and gave away cider that had been donated by Blur’s Alex James.

Clarkson has been running the 1,000-acre farm for more than a year for a forthcoming Amazon Prime show called “I Bought A Farm”.

At the shop’s “grand opening”, Clarkson cheerily sold potatoes to a steady stream of members of the public who queued to get in.

Clarkson told the PA news agency: “It’s going really well. We’ve had a good turn out and we’ve had more customers than Aldi – we’re putting the German giants out of business.

“This is the end of supermarket shopping!

“Farming is hard work, but it is rewarding when you sell potatoes and other produce as it comes on song. I’m only selling what is seasonal. The pumpkins, lavender and the honey will all be coming – so there’s quite a lot to do.

“And you thought this was going to be a car interview… ”

Clarkson’s shop sold potatoes for £1.02 per 2kg, declaring them “cheaper than Aldi” on the labels. Shelves where “mildly organic” horseradish and “good exercise chicken eggs” had were empty.

Elsewhere on the farmland were Clarkson’s health and safety style signs which told visitors “do NOT catch fire” near an open fire, and “Don’t fall in this big hole” near a hole in the ground.

Tom Hogg, 28, from Witney, said: “The farm shop is really, really good. It’s great to see Jeremy completely diverting his paths. He’s creating something that people can come to and get locally sourced, organic food.

“It’s been grown on the land locally and that is a great step – it tastes much better. And he is supporting smaller entities by doing it. It’s in a wonderful setting where he’s decided to do this. He’s kept it raw, he’s kept it a farm and that’s really important.”

Sam Brook, 20, from Cheltenham added: “It’s been great to meet Jeremy today – I’ve always watched Jeremy on all the shows he does and I love that he’s doing this.”

There is no official release date for “I Bought A Farm” yet but it is expected later this year.