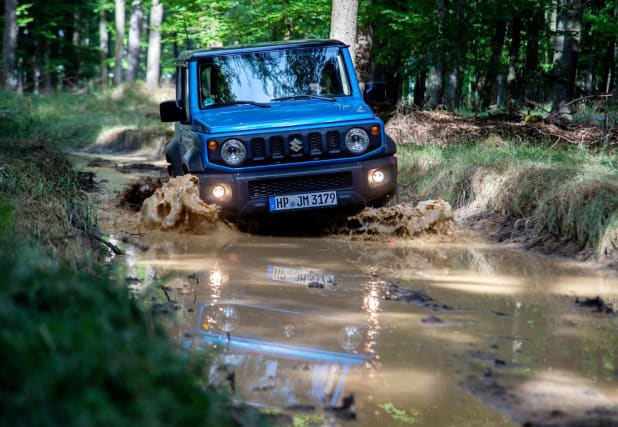 When people think of car enthusiasts, they tend to think of sporty cars driven quickly down winding B roads or flat out on track. But there's another group that are often overlooked — off-roaders.

These people are happy plugging along at relatively slow speeds on a dirt track in the middle of nowhere, tackling steep muddy inclines or wading through waist-high water. It's called greenlaning, because it involves driving down unpaved roads, known as green lanes.

If the sound of this tickles your fancy and you either don't know what car to buy, or you're a seasoned pro looking for a new car, we've put together a list of some of the best new models out there.

The Suzuki Jimny might be one of the budget entries in this list, but that doesn't mean it's a poor contender. It's the least pretentious car in this list – perhaps even of any car on sale today – which makes it perfect for green laning, because you won't be too worried about getting it muddy.

It's also got four-wheel-drive and a low range gearbox to help when the road gets really bad, so it's more than just a cute-lookming 4×4, it's a capable one too.

As a family SUV the Wrangler might not be your best bet, because there are similarly priced rivals out there that offer more luxury and a refined driving experience.

However, what those rivals don't have is an imperious ability to tackle off-road courses. The Jeep name is synonymous with 4×4 driving, and the Wrangler keeps that legacy going strong.

With four-wheel drive, a sturdy ladder-style chassis and low-range gearing, it's perfect for getting off the beaten track. Opt for the Rubicon trim for the full green laner experience, with its knobbly tyres fitted as standard.

Few brands have built a reputation for dependability like Toyota, and that's exactly what you want when you're going to be pounding rough, rutted roadways. Its old-fashioned suspension might make it less refined on the road, but when the Tarmac ends it comes into its own.

And with a gruff, torquey diesel engine, it can pull through just about anything you throw at it. Horrific weather in the dead of winter? No problems there, either, and if you do need something practical carry lots of luggage and/or people from time to time, the Land Cruiser has almost van-like practicality, too.

It might be better known nowadays for making a racket in Knightsbridge as well heeled owners drive around showing off how noisy their AMG version is, but the G-Class's roots are in off-road driving.

Its boxy shape and short overhangs make it ideal for traversing steep angles, and its advanced four-wheel-drive system means there's not much terrain that can stop it. The G's trump card, though, is that it's still a premium Mercedes, meaning the interior is well-equipped with top-of-the-range materials, so you don't have to sacrifice comfort and quality to go off road.

Ford's Ranger has gained a reputation for being one of the go-to pickup truck models for those who need something rugged and practical. However, the base models have nothing on the uber-off-road-ready Raptor.

Its 210bhp might not be too powerful, but with Ford Performance responsible for building the rest of the truck, it more than makes up for that with an incredible specification that includes a raised suspension, Fox Motorsport dampers that can soak up even the biggest bumps, and chunky wheels for endless grip. It's green laning overkill, but it's undeniably awesome.

Yes, the Nomad might look like a collapsed scaffolding on wheels, but it's actually one of the most exciting off road experiences on the market. It's much more than an Ariel Atom with chunky tyres, too.

It sports a new Honda engine and rally-spec Ohlins dampers that mean it's capable of going incredibly quickly, and not shaking its nuts and bolts loose as it does so. It's certainly the left-field choice in this list, but it's also the most fun.

Though not quite on the market just yet, it's all but guaranteed the new Land Rover Defender will be one of the most capable vehicles money can buy.

A new aluminium monocoque is said to improve stiffness over traditional 'body-on-frame' chassis setups that off-roaders tend to use while 'Configurable Terrain Response' is able to optimise the 4×4 system for practically any surface.

Similar in size and ethos to the Jimny mentioned earlier, the Panda Cross 4×4 may initially seem off putting because of a lower price. That, and its city car underpinnings.

In reality though, this is a tough little mudder that's equally as capable as vehicles twice its size. A dedicated off-road mode can prime the machine for rough terrains, while an appropriately raised ride height and body cladding gives it the clearance and protection to avoid any damage.