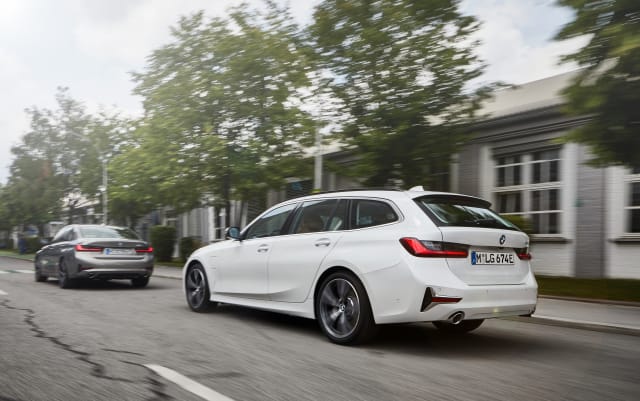 BMW is set to expand the range of its popular 3 Series model with the introduction of new plug-in hybrid models and a high-powered diesel.

The petrol-electric hybrid models, badged 330e, will join the existing rear-wheel drive version of the saloon to be offered as both four-wheel-drive and Touring estate variants.

Power comes from a combination of a 2.0-litre four-cylinder petrol engine and an electric motor that make a combined 249bhp, with 288bhp available for up to 10 seconds at a time with the standard boost feature. Torque is measured at 420Nm, while the all-electric range is measured at 34 to 42 miles.

Bringing the number of electrified 3 Series variants up from one to four, the standard models offer impressive fuel economy of 166mpg to 177mpg and CO2 emissions of 38 to 36g/km. Opting for four-wheel-drive variants has a small negative effect on these figures.

The 340d, meanwhile, becomes the new range-topping diesel, and is only available with four-wheel-drive in both saloon and estate forms. Power comes from a 3.0-litre six-cylinder engine with a 48-volt starter generator that makes this a mild hybrid powertrain.

Each of the models in the expanded model range will be showcased on the BMW stand at the Geneva motor show next month.