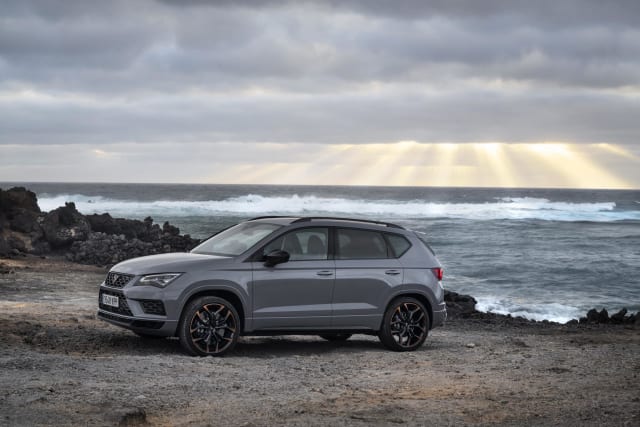 Cupra has announced a limited-edition version of its Ateca performance SUV.

Restricted to just 100 units in the UK, the Cupra Ateca Limited Edition brings with it both increased performance and a higher specification than the standard car.

It uses the same 2.0-litre four-cylinder petrol engine as the standard Cupra Ateca, linked to all four wheels through the brand’s 4Drive system. It can go from 0-60mph in just 4.7 seconds before hitting a top speed of 153mph.

However, an ABT Sportsline power upgrade is now available – boosting power from 296bhp to 345bhp, while torque gets a small bump up to 440Nm from 400Nm. Though outright performance figures remain unaffected – though the cars top speed does rise by 2mph to 158mph – better mid-range torque delivery will help to provide a more energetic driving experience.

Just 20 of the 100 Cupra Ateca Limited Edition cars will be available with a titanium Akrapovic exhaust which helps to bring weight down by 7kg, while improving the car’s sound.

Newly-designed 20-inch copper alloy wheels come as part of the package, as well as a copper-thread carbon fibre roof spoiler. The same copper thread effect is used on the wing mirror covers, too.

Those large alloy wheels mean that the Cupra Ateca Limited Edition can be fitted with performance 18-inch Brembo brakes, too.

Prices for the Cupra Ateca Limited Edition start from £42,120, rising to £45,160 for the same car fitted with the Akrapovic exhaust system and finished in Graphene Grey paint.