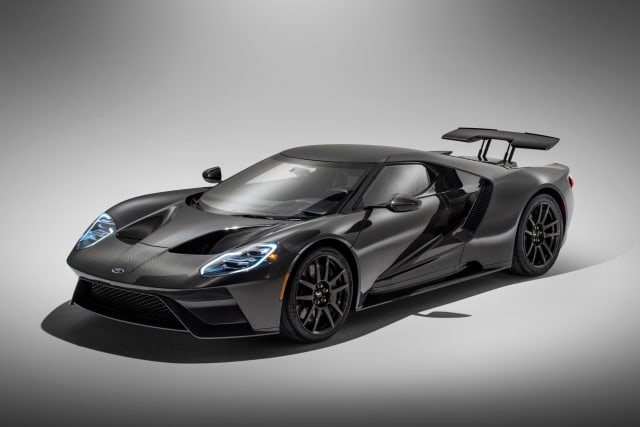 Ford has introduced a raft of upgrades for its GT hypercar, with headline changes including more power and a new standard-fit exhaust system.

Its 3.5-litre V6 engine has seen power upped to 660bhp from 647bhp thanks to a number of mechanical changes directly derived from the track-only GT Mk II, while Ford says the car’s torque band has also been widened.

Cooling of the engine has also said to have been improved thanks to new ducts that apparently increase air flow by 50 per cent, while suspension tweaks in track mode have been made in a bid to improve high-speed control.

Linked up to the revised engine is a new standard-fit Akrapovic exhaust system said to bring an ‘unmistakable’ sound to the car as well as shaving four kilograms off the weight of the vehicle.

Alongside mechanical upgrades, Ford has also introduced two new paint schemes for the GT. First up is Liquid Carbon which sees the car’s carbon fibre bodywork exposed, save for a layer of clearcoat to keep it protected from damage.

Carbon fibre wheels come as standard for this configuration, while coloured centre stripes can be added as an optional extra.

There’s also a new take on the Gulf heritage livery available for the previous model. Though retaining the iconic blue and orange colour scheme, it takes on a more modern-looking number design — now a ‘6’ as well instead of ‘9’ — and standard-fit carbon fibre wheels.

There’s no word on pricing for the updated Ford GT, but expect it to cost many pounds. You also can’t just waltz into your local Ford dealer asking for one either, with the firm notorious for being incredibly selective in who can buy one — meaning you’re unlikely to get on the list if you’re not already there.

First Drive: The BMW 2 Series Gran Coupe 220d is an appealing prospect – but not as a diesel