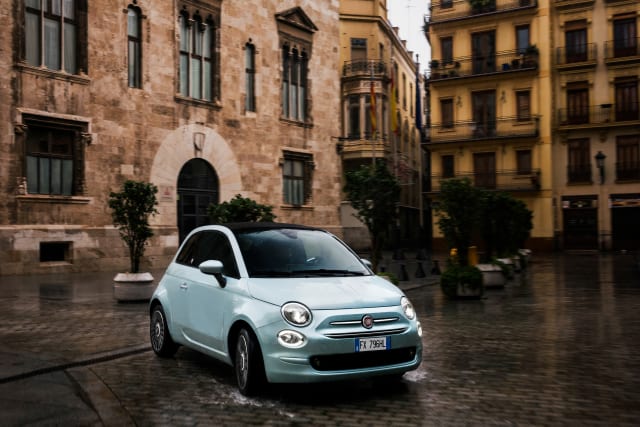 It’s no understatement to say that the 500 is Fiat’s icon – a model that keeps soldiering on with minimal changes, yet never seems to look a day older.

The reborn 500 was launched in 2007, and while there have been more special editions than there have been DFS sales, as well as a mild facelift a few years back, it’s more or less the same car that it was 13 years ago.

But with manufacturers increasingly under pressure to make their cars more environmentally friendly, it’s time for the first electrified Fiats to show their faces…

First things first, we should get out of the way that this isn’t technically Fiat’s first electrified model, as a pure-electric 500e has previously been sold in small numbers in the States.

However, it’s the first electrified model for Europe – featuring a new 1.0-litre petrol engine mated to an electric motor and battery, which will over time replace the existing 1.2-litre petrol unit previously available.

To help celebrate the new powertrain, there’s yet another special version – the Hybrid Launch Edition in this case. More on that later.

The 1.0-litre petrol unit in the 500 Hybrid is the latest in Fiat’s FireFly engine series, though it’s the first to be fitted with mild-hybrid technology. It combines the block with a belt-starter generator and a small battery.

Watching paint dry feels quicker than waiting for the 500 to get up to speed, with just 69bhp and 92Nm on tap. The sprint from 0-60mph takes a rather lethargic 13.8 seconds, and maxed out, Fiat says it will hit 104mph. The firm also promises that it delivers 25 per cent more torque than before, though you’d struggle to tell.

The mild-hybrid technology does, however, bring efficiency savings, with Fiat claiming it will return 53.3mpg, while CO2 emissions are particularly low at 88g/km – that’s 20 per cent less than the outgoing 1.2-litre petrol engine.

Fiat has the city car market nailed, and the 500 is truly excellent in urban areas. Its light steering (enhanced further with a ‘City’ mode) makes it incredibly nippy, and tremendously easy to park. And while it takes a while to get up to speed, that doesn’t matter too much when you’re zipping between the lights.

The ride could be more comfortable, though refinement on the whole is decent, and thanks to a six-speed manual transmission (most cars in this segment only have five gears) it doesn’t feel too far out of its depth at higher speeds. That’s providing you keep at a constant speed – trying to overtake at anything above 50mph feels like an impossibility.

One bizarre feature of the hybrid, though, is the coasting function. It’s only available at slower speeds, though it’s unlike many mild-hybrids which automatically disengage once you haven’t been accelerating for a few seconds. That’s because the Fiat needs you to put into neutral to be able to take advantage of this – it’s something that feels unnatural, and also not particularly safe.

Fiat says most 500 buyers choose them because of how they look – something that comes as no surprise given the vibrant chic looks, the vast array of colour combinations, and variety of specifications to choose from.

For a 13-year-old design, the 500 still looks fresh, modern and appealing, with mild tweaks continuing to make it stand out in the supermini class. None more so than the Hybrid Launch Edition version tested here with its cool Dew Green paintwork, special hybrid badging and satin chrome detailing. Our model’s panoramic sunroof and 17-inch alloy wheels also help it to look the part, and will no doubt continue to make it that desirable fashion accessory that many view it as.

The same flair and character of the exterior makes its way into the 500’s cabin, too, with a whole host of cool details offering something a little different in the city car class. There’s a colour-coded matt dash, for example, and a glass roof throws plenty of light into the cabin.

However, the ageless design can’t be said for the cabin, with plenty of cheap plastics making it feel a bit low-rent next to the new wave of softer touch plastics. These would be forgivable on the entry-level 500, but don’t quite cut the mustard on this top-spec version.

If you choose this model, though, you’re treated to some special seating upholstery made of ‘Seaqual’ yarn. They feel and look pretty ordinary, though they’re made entirely from recycled plastics, some of which have come from the sea. Bragging about them will certainly earn you brownie points with the kale and spinach smoothie brigade…

The change from the old 1.2-litre engine to a 1.0-litre mild-hybrid has added around £500 to the price of the model – though you’ll be able to recoup some of this expense back with the lower running costs.

It means that prices for the model now start from £12,665, meaning it’s not quite the bargain it once was. But our top-spec Launch Edition is too pricey – costing from £16,795 – enough to buy you a Volkswagen Up! GTI.

It offers plenty of kit, though, including LED running lights, a Beats sound system, rear parking sensors and climate control to name but a few niceties.

Making the 500 a hybrid feels like a step that Fiat was forced into doing, rather than one it wanted to – the bosses themselves admitting that they’ve watched from afar to see if electrified models take off, before choosing to join the party once they’re convinced people are actually buying them.

That’s maybe a harsh evaluation, as the new system is smooth and returns decent efficiency, but it still offers limited performance and the need to take it out of gear to make it coast just feels lazy.

But none of this detracts from the fact that the Fiat 500 remains the most characterful, stylish and lovable city car on sale today – something that none of its rivals can even get remotely close to it for.