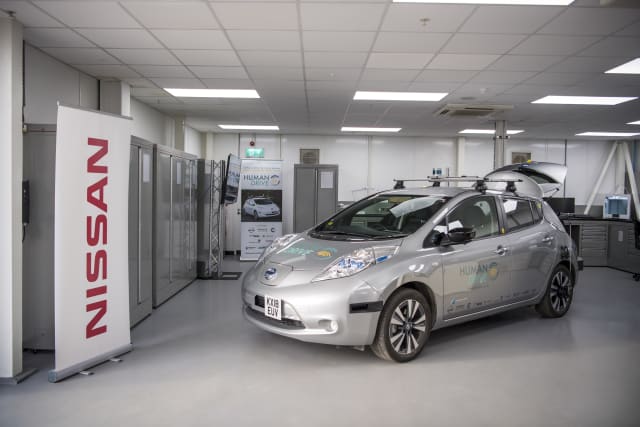 Electrification might be the public face of change in the car industry, but there's another battleground bubbling away in the background that will be even more revolutionary.

At the start of the last decade the idea of cars driving themselves was the preserve of science fiction, but as we head into the 2020s autonomous driving has become a genuine reality.

This week, Nissan has revealed that in November 2019, one of its Leaf electric hatchbacks drove from the firm's technical centre in Cranfield, Milton Keynes, 230 miles north to its Sunderland factory using autonomous driving technology.

Today, we're in Cranfield to speak to the team behind HumanDrive, a £13.5 million government-backed project that's trying to advance autonomous vehicle technology with a focus on giving them more human driving characteristics. This is the team behind that 'Grand Drive' last year.

The various partners involved in the project all brought their own abilities to the table, such as Nissan, which provided vehicles and leads the autonomous vehicle development, Hitachi, which is focusing on artificial intelligence and 'machine learning', and the University of Leeds, which uses its world-leading driving simulator to study how people drive and their responses to autonomous driving.

Each Leaf is fitted with advanced technology that can map the vehicle's surrounding, including high definition cameras and LIDAR, which shoots light beams into the surroundings and measures how long it takes to return to the source. This helps to create a constantly updating, highly detailed 360-degree image around the car.

Military-grade GPS helps the vehicle know exactly where it is in the world, and on-board software reads all of this data to ensure the car travels safely through it.

At this stage, Nissan says it is working with the technology in its simplest form to make sure it nails the basics. Therefore, the car cannot be dropped in a random location and given a random destination to figure out its own path through the world; instead, its path must be mapped by human drivers first so the vehicle can follow.

Though that's initially disappointing – it was perhaps optimistic to think fully self driving cars are already here – the technology on show is still incredibly impressive, because it has to adapt to the chaos that surrounds it. While it's following said route, it has to deal with being cut up by cars on the motorway, know when to safely enter a roundabout, and stop at traffic lights when they're red.

On a 13-mile test route on real roads near the base – including a busy M1 motorway – where it's perhaps most impressive is on the country lanes surrounding the Cranfield base. The central dividing lines are faded, the road surface is atrocious, and vehicles of various sizes speed towards you on the other side of the road. The vehicle is simply sticking to its mapped route, but it's doing so with incredible accuracy and while also knowing what's a hazard and what isn't.

At no point did I feel nervous about the fact the 'driver' isn't holding the wheel, nor when we pull up to a T junction and wait for a gap to enter traffic.

Nissan has been developing its own 'intelligence' systems, which are what's fitted to the car that did that epic 230-mile drive, but project partner Hitachi has been working to give that a more human characteristic. It's a key focus of the project, hoping to make passengers feel safer and more comfortable if it feels like a person driving – like going "from a taxi to an expert chauffeur", according to Nissan.

Hitachi's software still uses pre-planned routes for simplicity's sake, but here technology takes the 3D image of the world the sensors 'see' and interprets it based on huge amounts of data it has collected from analysing how real drivers react to certain situations.

On a private test track designed to mimic real roads, we see a visual representation of this. The software sees the road ahead and creates safe boundaries within which it can operate, for example to not hit the kerb on one side or cross into oncoming traffic in the other.

The software then analyses how human drivers have negotiated that road and creates a human-like route within those boundaries. It was also demonstrated that the car can pass a parked vehicle safely, which was added at a random point after a few laps of the test route. It did so with a bit of a surprised jerk to the side, but otherwise smoothly, passing while straddling the white lane before pulling back left.

To the untrained eye, it doesn't feel all that different to Nissan's systems. But watching the computer screens scattered throughout the vehicle feels like glimpsing into the Matrix, and the visualisations make it clear there are millions of calculations happening all the time.

While Hitachi is putting the human-like characteristics into practice, the University of Leeds' Institute for Transport Studies has been studying human drivers to get the data set Hitachi can use. The university boasts the most advanced driving simulator in the country, and it has created virtual worlds that human drivers must navigate.

It then takes the data from how those humans negotiate certain junctions and hazards and builds a model for the autonomous vehicle to follow.

During the studies, the human drivers were asked to sit in on simulated drives and asked to press a button when they felt safe and when they were nervous. These drives featured the basic model built from the data set, but for another simulation they were unaware they were seeing a direct recreation of their own drives. The data showed drivers were generally less nervous during their own drives, demonstrating that human-like behaviour is important to make passengers feel comfortable.

While this data has then been used to inform the models used by Nissan and Hitachi, there are further complications to take into account. For example, Leeds University found that people have different responses to certain sensations based on their personality, so there isn't a one size fits all outcome.

Does that mean autonomous vehicles will have to learn the driving style their passengers prefer and adapt to who's on board? If so, how does a passenger give feedback to a car to let it know they like or dislike a vehicle's driving?

It's clear, then, that getting the cars to drive themselves is only the beginning. However, with government-backed projects like this, the UK is hoping to be at the forefront of this fast-moving technology.

And while Nissan and its partners consider this project a success – the goal was to travel 20 miles autonomously by the end, and it traveled 230, for example – it's a multi-faceted technological endeavour. Nissan has received more funding from the government and its headquarters in Japan to continue pursuing its research.

Self-driving cars might be closer than you think – regulation and public acceptance could prove the only stumbling block...