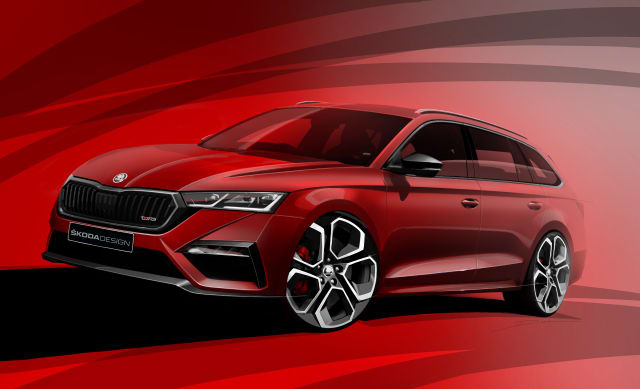 Skoda has unleashed first sketches of its upcoming Octavia vRS, which will feature a plug-in hybrid powertrain.

Based on the recently-unveiled fourth generation of the compact Czech model, the vRS in ‘iV’ will boast 242bhp from its petrol-electric powertrain. It’s believed that unit is the same 1.4-litre unit found in the new Volkswagen Golf GTE that the Octavia shares underpinnings with.

It’s also expected that non-hybrid petrol and diesel variants of the car will be available for the vRS too, as with previous models, though Skoda has yet to confirm this.

Set to be available in both hatchback and estate guises, the vRS will add racier design details to the car including a more aggressive front bumper, large alloy wheels, black styling elements and a ducktail spoiler. A vRS trademark reflective strip at the rear has also been included.

No word yet on performance or efficiency figures, though expect the ‘iV’ to be marginally slower than pure internal combustion units as a result of its extra mass. That said, it’s likely to be comfortably ahead on official efficiency figures.

Chassis tweaks will likely be made to the car as well, along with improved equipment to mark out the vRS as a range-topper. We’re likely to hear more details on this at the car’s reveal on March 3, ahead of the public opening of the Geneva Motor Show.