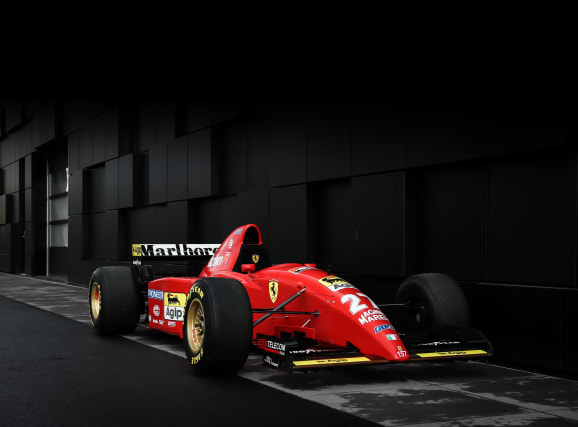 The first Ferrari F1 car driven by legendary racer Michael Schumacher has gone up for sale in London.

The 1995 Ferrari 412 T2, chassis number 157, marks the beginning of one of the most iconic driver and team combinations in the history of the sport.

This model comes from the final season to use the V12 engine, and this example became the last V12-powered car to win a Formula 1 race, taking victory in the Canadian grand prix that year with Schumacher’s team-mate Jean Alesi at the wheel.

Included in the sale are various documents, such as timesheets from Schumacher’s first test of the vehicle at Ferrari’s Fiorano test track in Italy, as well as further sheets from testing at Estoril, Portugal.

Once the car was retired from competition, it was bought directly from Scuderia Ferrari team manager Jean Todt by a German collector. The engine was overhauled in 2014 under its current owner, covering less than about 60 miles since.

In 2018, the car was stripped and rebuilt by Ferrari at its Maranello factory, where it was given a full chassis service, brake system overhaul, gearbox service, and fresh Rosso Scuderia red paint. It was then certified by Ferrari Classiche as a genuine example retaining its original engine, chassis and gearbox.

London-based Girardo & Co, a leader in the private sale of sports and racing cars, is facilitating the sale. Its founder Max Girardo said: “It goes without saying that it’s an honour to be handling the sale of this exceptional and significant F1 car, and to not only have the chance to spend time with such a machine but also find it a new owner is true joy.”

Despite a controversial career that saw him twice involved in collisions in the final race of a season that determined the outcome of the World Championship, the 51-year-old is remembered fondly as one of the greatest racers in the sport’s history and for donating millions to charity.

On December 29, 2013, Schumacher suffered a traumatic head injury in a skiing accident and was placed in a medically induced coma for six months. He later left hospital and continues to receive medical treatment and rehabilitation out of the public eye.