First Drive: Has a refresh revitalised the Lexus RC F? 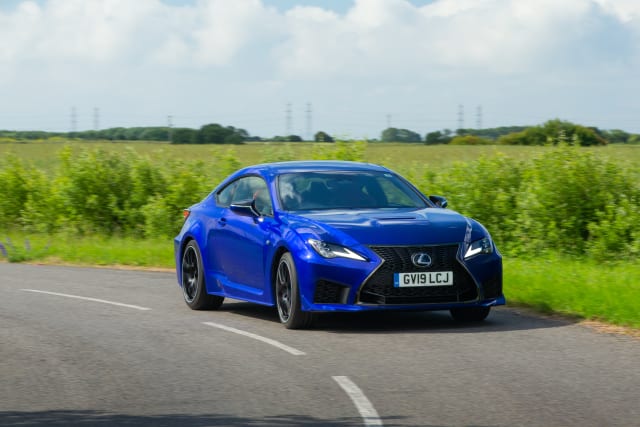 Way back when, the naturally-aspirated V8 engine was something that defined the high-end performance coupe segment — but that trend has died out for the most part. BMW’s second-to-last M3 utilised eight-cylinders, but the proceeding model switched to a six-cylinder engine, while the once-hellish 6.3-litre Mercedes C63 AMG dropped down to 4.0-litres and took on a set of turbines. A similar thing happened with the Audi RS5 too, swapping its eight-cylinders for six.

There is an outlier to this trend though, and one that’s often forgotten. You see, the Lexus RC F joined the fray in 2014 in a fashion that went against tide — offering a naturally-aspirated 5.0-litre V8 engine. Admittedly sales never set the world alight, but Lexus hasn’t given up the ghost and has recently treat the model to a light refresh. Are the updates to this old brute effective? We find out….

Though Lexus is a firm very much focused on hybrid technologies these days, it (perhaps surprisingly) hasn’t messed with the RC F’s powertrain formula here — sticking with that raucous V8 of old — albeit with a little less power.

Changes do come beyond that, though. Visual alterations include new headlights, a tweaked front grille and revised taillights, while mechanical changes are namely refined suspension bushings, minor weight savings and launch control as standard. New Michelin Pilot Sport 4S tyres are thrown into the package as standard, too.

So, on to the V8 that defines the Lexus RC F. This 5.0-litre, eight-cylinder unit produces 457bhp and 520Nm of torque (down 14bhp and 10Nm as a result of stricter emissions regulations), delivered to the rear wheels through an eight-speed automatic gearbox.

As a result, the RC F is capable of 0-60mph in 4.1 seconds before reaching an electronically-limited 168mph top speed. Efficiency is far from the name of the game here, with a claimed WLTP Combined figure of 23.9mpg with CO2 emissions weighing in at 258g/km.

The old-school nature of this car is a bit of an anomaly today, and that gives a distinctive character to the unit. Initially, it can feel sluggish with a lack of immediate torque but once the revs tick over the 3,000rpm mark its power comes in with a real ferocity — a curve that’s matched by its engine note too.

Though the engine of the Lexus RC F may be brash and spine-tingling, the driving experience isn’t really that at all.

This isn’t some agile monster looking to carve up every corner in its path and run circles around its rivals. Rather this feels more like a refined cruise missile — happy to sit on a motorway in supreme comfort and turn on the straight-line goods when called upon. If mashing the throttle to indulge in acceleration is your thing, you may find yourself at home here.

When it comes to cornering though, the RC F can be frustrating. It’s not particularly keen to get its power down (though cold January weather didn’t help that) and while there is a sense of composure through the corners, the car never particularly at home when trying to attack a tight country road. Soft-set suspension creates a wallowy feel to the rear of the car, and it’s hard to make the most of the evident performance on offer as a result.

In the grand scheme of things, little has changed in the way the Lexus RC F looks — not that we’re calling that a bad thing. Its altered headlights are the most noticeable change and to us improve the package, but you’d be hard pressed to notice tweaks otherwise.

Its overall styling remains quintessentially Japanese, with its low-slung silhouette littered with peculiar angles and ‘look at me’ styling elements. It’s certainly an acquired taste, particularly in the Azure Blue colour our test car is in, but this particular tester is a fan.

Though updates have come to the outside of the car, that treatment hasn’t really come to the interior. To an extent, that’s fine, it’s still loaded with high-quality materials and feels incredibly well put together.

It does feel outdated, though. The woeful infotainment system is still controlled via an irritating notepad, and there’s even a CD player included for a real throwback. We’d like to have seen the introduction of parent company Toyota’s latest system here.

As for space, four can be seated and the rear row is surprisingly usable on shorter journeys — though we’d avoid carrying four adults for longer trips. Its boot can hold 366 litres of luggage, too, which is notably down on the BMW M4’s 445-litre capacity.

When it comes to standard equipment, Lexus has thrown the book at the RC F. Luxuries like rain-sensing wipers, automatic headlights, all-round parking sensors, keyless start and its infotainment system are thrown in out of the box, while Lexus’ Safety System + brings adaptive cruise control, lane keeping assist, automatic high beams and pre-collision warning.

Pricing kicks off at £62,900 for the RC F, which undercuts most rivals, though it’s worth noting that used examples as recent as 2016 can be had for under £30,000 easily — so be prepared for a notable drop in value through ownership.

Though updated for 2020, the Lexus RC F still very much remains an old school machine — for better and worse in some areas.

Its engine is something to behold in a modern era of turbocharging and electrification, providing one of the most addictive audible experiences of any car on the market as well as brutal acceleration to back the brawn up.

It’s just a shame the driving experience leans more towards that of a long-distance cruiser than a real performance animal, feeling more like an Alcantara-clad wingback chair than a Recaro bucket seat to make a furniture comparison. It doesn’t feel quite right.