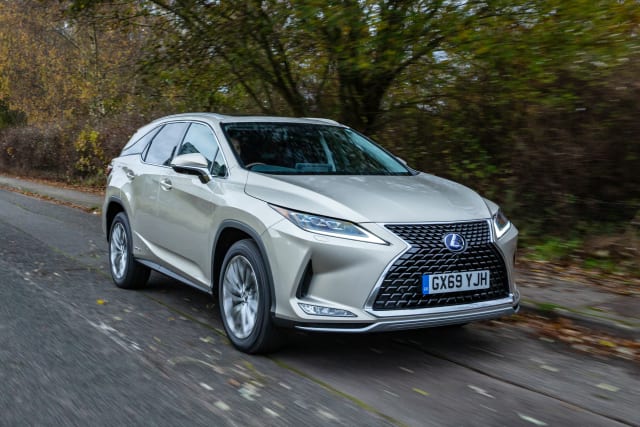 The modern SUV tends to be a contrast. On the one hand, it provides the spaciousness and practicality that modern drivers want. Yet on the other, it tends to be less economical and more fuel-heavy – going against the grain amidst modern a global push to drive down emissions while improving efficiency.

But Lexus has long believed that a hybrid powertrain is key to the SUV’s success. It’s why the RX has been a centre point of the firm’s range and now, there’s facelifted seven-seat version. Here, we see how the RX L deals with the open road.

The biggest change here is the addition of those rearmost seats. It means that the traditionally five-seater RX opens up to a much larger market, and combats rivals like the Volvo XC90 and Land Rover Discovery for outright passenger capacity. The exterior of the car has been sharpened too, giving it an even more angular appearance – if that were even possible.

The interior is a comfortable place to be, boasting high-end materials befitting a car costing just over £60,000. And, of course, there’s that all-important hybrid powertrain to talk about – but we’ll get to that in a minute.

If you were expecting to find some compact, four-cylinder engine powering the RX L, you’d be wrong. Instead, under the bonnet lurks a 3.5-litre V6 petrol engine, which is linked to electric batteries. It means you get a healthy 308bhp, and electrical assistance too. But as this is a ‘self-charging’ hybrid, rather than a plug-in, it can only really run on electric for short periods, such as when parking or in slow traffic. For every other occasion, that V6 engine is going to be called upon. The engine is used to replenish the battery’s charge, which is topped up by regenerative braking too.

Getting from 0-60mph takes just under eight seconds, while flat-out it’ll do 112mph. Economy-wise, Lexus claims 34.4mpg combined and emissions of 186g/km CO2.

Around town, driving the RX L makes for serene forward progress. It’s refined and quiet at low speeds, and though the suspension does separate most of the road imperfections from the cabin, the occasional larger bump or pothole has a tendency to jostle the cockpit and its occupants.

Go a little too hard with that throttle, however, and the CVT gearbox dealing with the power causes engine revs to rise swiftly – without any reasonable match in forward progress. It’s certainly not ear-bursting loud, but it’s far less refined than rivals. However, once you’re up to speed and cruising it’s a pleasant place to be. It’s just a bit of a shame that the high-speed experience isn’t as pleasant as the low-speed one; after all, SUVs like this are meant to cover longer distances with little bother.

Given that it’s housing two more seats, the RX L does well to disguise its overall heft. The rear three-quarter section does look a little heavier than on the standard RX, but it’s still quite a sharp design overall. The front end’s sharp design stands out against the other SUVs on the market today, while around the back the design manages to look hefty without being dumpy.

The cabin of the RX L is a pleasant breath of fresh air compared to rivals. Sure, the button layout can be at times a little confusing, but the plentiful, high-quality materials and neat features like a central analogue clock give it a premium feel. The front end of the car is particularly comfortable, with big, wide seats which provide plenty of support without being too constrictive.

Those in the back are equally well catered for, with a decent amount of leg- and headroom. The seats are very comfortable, too. The third row of seats is best suited to kids, however, as adults will end up feeling quite cramped – particularly over longer journeys. However, it’s good to have the option and it’s one which will be welcomed by larger families.

Few are going to be left wanting when it comes to in-car tech in the RX L. There’s three-zone climate control with ‘nanoe technology’, along with a multi-function heated steering wheel and a 360-degree panoramic views. There’s wireless smartphone charging as well, joining rain-sensing wipers and keyless entry in a comprehensive list of on-board tech.

Then there’s the safety technology. You get pre-collision warning, dynamic radar cruise control, road sign assist and adaptative high beam headlights. Blind-spot monitoring is included too, meeting rear cross traffic alert. Sure, the RX L costs over £60,000, but the amount of equipment available with it is very impressive. As you drive the car you find more and more features – there’s almost far too much to discover right away.

If you’re after a large, comfortable and well-made seven-seater, then you’d be on the money to go for a Lexus RX L. Packed with clever features and a decent level of standard equipment, it’s a relatively high-priced but extremely well-equipped option.

It’s the powertrain which doesn’t feel quite right here, since that inability to properly go around on electric power makes it less adept at reducing fuel costs than other hybrids. However, if the need to go on battery power alone around town isn’t top of your list of requirements, then the RX L is a fine choice.