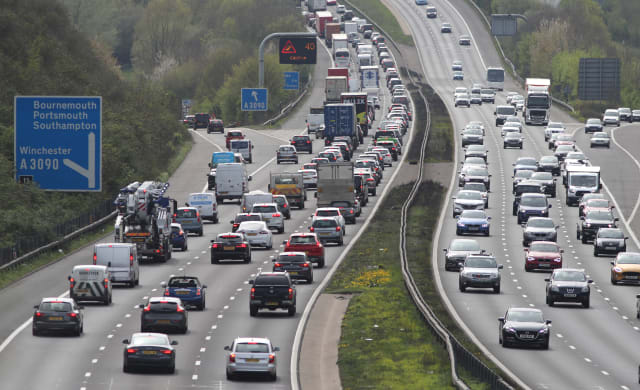 A ban on sales of new petrol and diesel vehicles will be brought forward to 2035, under plans outlined as the Prime Minister launches key UN climate talks in the UK.

Boris Johnson is launching the COP26 talks, to take place in November in the UK, with a speech setting out Britain’s stall as a leader on tackling climate change.

He will urge other countries to follow the UK’s lead in setting targets to cut their emissions to net zero – with major cuts to greenhouse gases and any remaining pollution offset by measures such as planting trees.

As part of the UK’s moves to meet its legal goal to reach net zero by 2050, the Government will consult on bringing forward a planned ban on the sale of new petrol and diesel vehicles from 2040 to 2035 – and earlier if feasible.

The ban, which Government advisers the Committee on Climate Change have called for by as early as 2030, will also include hybrid vehicles for the first time.

At an event attended by Sir David Attenborough, Mr Johnson will call for international efforts to reach net zero as early as possible through investment in cleaner technology and protection of natural habitat – which will also help reverse losses in wildlife.

Mr Johnson said:  “Hosting COP26 is an important opportunity for the UK and nations across the globe to step up in the fight against climate change.

“As we set out our plans to hit our ambitious 2050 net zero target across this year, so we shall urge others to join us in pledging net zero emissions.

“There can be no greater responsibility than protecting our planet, and no mission that a Global Britain is prouder to serve.

“2020 must be the year we turn the tide on global warming– it will be the year when we choose a cleaner, greener future for all.”

The event on Tuesday will also kick off a year of climate action across the UK, the Government said.

The UN climate talks in November are the most important since the Paris Agreement to curb global warming was secured in 2015.

Countries are expected to deliver more ambitious domestic plans for cutting greenhouse gases by 2030 – as current proposals are not enough to prevent dangerous temperature rises.

Pressure is also on countries to set out long-term plans for cutting emissions, with the science now clear that the world must reduce greenhouse gases to zero in a matter of decades to avoid the worst impacts of climate change.

The run-up to the talks will require a major diplomatic effort from the UK to secure ambitious climate action from countries – at a time when Britain is also negotiating trade agreements with the EU and other nations.

Last week former clean growth minister Claire Perry O’Neill, who stood down as an MP in the general election, was sacked as president of the talks by the Government, who said it will be a ministerial role going forward.

Nick Mabey, chief executive of climate change think tank E3G, said the UK’s presidency had got off to a bumpy start with the decision to dismiss her.

Her replacement has a “daunting task” and would need to be a political heavy hitter, with an immense diplomatic effort needed from the UK to steer the negotiations, he said.

“A successful presidency could bring about transformational changes in the global economy that would accelerate the transition to net zero and improve our resilience to climate risks.

“Importantly, it would reinforce trust that the Paris Agreement is working – an essential outcome in the face of Trump, Putin and Bolsonaro, whose disdain for multilateralism threatens the possibility of a climate safe world,” he said.

While the UK has a legal target to cut emissions to net zero by 2050, the Committee on Climate Change has warned domestic action to slash carbon dioxide and other greenhouse gases is lagging far behind what is needed – even before the net-zero target was set.

He added: “We must question whether we will have a sufficient supply of a full cross-section of zero emissions vehicles in less than fifteen years.

“We will also need a package of grants coupled with a comprehensive charging infrastructure at homes and in towns, cities, motorways and rural locations.

“At the very least the Government should take up the AA demand to cut VAT on new EVs to boost sales and make vehicles more affordable to those on lower incomes.”

He also raised concerns that hybrids would be excluded from sale under the plans.