UK Drive: The Tesla Model 3 is an electrifying tech-fest 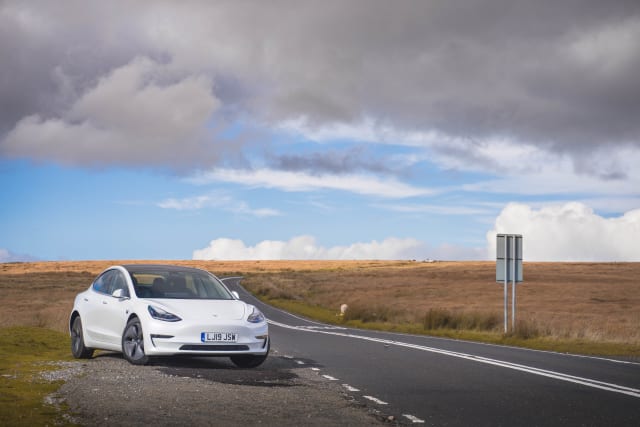 The Tesla Model 3 is the culmination of Elon Musk’s electric car company master plan. First came the Roadster, a small Lotus Elise-based sports car designed to make EVs cool, followed by the Model S, a premium saloon that would make big profits. With SUVs becoming the most popular market segment, he then added the Model Y, an upmarket people carrier with a similar goal to the S.

The end goal was this, the Model 3, targeting an affordable price point to bring electric motoring to the masses. There have been plenty of hiccups along the way, both for the company as a whole and this model in particular, but the Model 3 finally hit UK soil for the first time last year.

US buyers have access to an impressively inexpensive entry price of $35,000 (circa £27k), but in the UK prices start at £38,500 for a Standard Range Plus model – top-spec Performance models start at £52,000. With all that in mind, has it been worth the wait?

Under the skin the Model 3 follows a similar format to the S and X, with batteries fitted beneath the floor and utilising an electric motor for propulsion. In the Standard Range Plus model we’re testing, there’s a single electric motor on the rear axle, making it rear-wheel-drive, while Performance models also get a motor on the front axle to provide more performance and all-wheel-drive.

The interior is all-new too, with the stand-out feature being a single, centrally mounted screen containing all functions. Meanwhile, Tesla’s dedication to being technologically ahead of the game means it has the best smartphone app in the business, which can control functions remotely and even act as a key.

Literally speaking, nothing – or rather, a ‘frunk’ that provides a decent amount of extra luggage space up front, just one of the additional benefits of using compact electric motors. In this Standard Range Plus model, there’s a single electric motor on the rear axle that makes 302bhp and 420Nm of torque.

Those numbers are impressive, but it would be easy to regard this as ‘the slow one’ compared with the near-500bhp Performance version. However, with a 0-60mph time of about 5.4 seconds, it’s anything but. Under hard acceleration this entry Model 3 really shifts, helped by that instant-on torque response of the electric motors, so you’re never left wanting more.

While straight-line performance won’t leave you disappointed, if you’re looking for a left-field BMW M3 rival you might find the 3’s cornering abilities somewhat lacking. It’s not necessarily that it can’t corner at speed, rather that the steering is incredibly light and completely lacking any feedback. On top of that, its eco-focused tyres, which help improve range, have a tendency to squeal under duress rather than bite into the Tarmac.

The Tesla Model 3, therefore, lends itself better to those who want a serene, relaxing experience 99 per cent of the time, with blistering straight-line performance for occasional stress-busting blasts. In this case, the American excels. The silent propulsion of the electric motors is helped by sound-deadening in the cabin that means exterior noises are kept to a minimum, and any qualms about build quality appear to have been addressed, with no squeaks or rattles from the trim.

It is interesting to note, however, that the Autopilot feature that is so often lauded as a hugely enticing Tesla feature was largely disappointed. It’s not a semi-autonomous driver aid as many think, rather an advanced adaptive cruise control system that’s also common on rival premium cars. We found it late to react to cars on the motorway and jerky on the brakes; similar systems from Mercedes-Benz and Volvo work much better.

While the Tesla Model S draws some criticism for being rather featureless, there’s no denying it has a simple, upmarket elegance. The Model 3, on the other hand, is somewhat lacking in this department. It’s not unattractive, looking sleek and muscular at the front, but the rear end tapers gently into an odd combination of saloon and hatchback that ultimately results in a bulbous rear.

Our test car, painted in white, was compared to a fridge on more than one occasion. That might be a bit harsh, but given that this car is designed to act more like a high-tech appliance rather than appeal on an emotional level, perhaps it’s an apt comparison – it would be one of those fridges with a high-definition monitor and WiFi built-in for some reason though, wouldn’t it?

If the exterior looks like a hatchback designed by committee, the interior couldn’t be further from it. It’s an overused cliché, but it’s like an Apple Store, all minimalism and clean surfaces. There’s one screen that looms large in the centre of the dashboard, with essential information such as the speed sitting in the top corner closest to you – adjusting to looking left to see your speed doesn’t take long to adjust to.

The screen itself houses one of the slickest infotainment systems in the business. The design is simple rather than sparkling, but it responds quickly to inputs and is intuitive to navigate around, which is more than can be said of rivals. Its size also makes it ideal for navigation, so you can be zoomed in quite close but still see instructions far ahead.

As for space, the batteries in the floor and lack of engine mean there’s loads of room for passengers, particularly those up front, while only the tallest passengers would find rear headroom intrusive. The overall luggage space is 425 litres, which in reality provides more than enough capacity for even the biggest family shop.

Dual-motor all-wheel drive models are available for £47,000 in Long Range guise or £52,000 in Performance trim. These also get the premium interior with heated seats at the rear, and a one-year connectivity subscription for live traffic updates, music streaming and internet browsing.

Tesla is an exciting manufacturer because it approaches the car industry from a fresh perspective. Sometimes, that works against it, resulting in product delays and build quality issues, but in the case of the Model 3, it can result in a product that feels genuinely different.

Whether it’s the seamless app integration, fast charging network or easy ordering process, Tesla has managed to build an ownership experience that’s largely just as desirable as the cars themselves. The fact the Model 3 brings this into reach for a whole new demographic is exciting, and it’s no surprise to see it pushing established names in the sales charts.

It might not appeal on an emotional level, but the Tesla Model 3 manages to be fast yet serene, packed full of appealing tech, and practical to boot. With low running costs thrown into the mix, there’s not much going against it.