Long-term report: Settling in to the January resolutions with the Honda CR-V 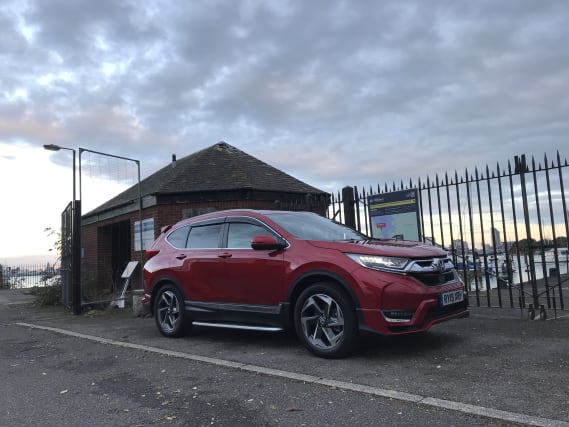 It’s safe to say January isn’t my favourite month. Nor does it happen to be many people’s favourite either, given it’s home to ‘Blue Monday’ – said to be the most depressing day of the year.

The joy and festivities of Christmas are soon over, and before you know it, you’re back to work with seemingly little to look forward to.

And then there are the joys of New Year’s resolution. Yes, that old chestnut. Whether it’s going vegan, learning something new or quitting smoking, often these can be fake promises to yourself that last all of three weeks.

I’ve always been in the mindset that there’s just no point even setting any, but in the spirit of ‘New Decade, New Me’ (cringe, I know) I thought I’d set a goal to lose weight and actually do some more exercise.

Never one to fancy going to the gym or to pop out for a jog, I’ve settled on biking as the new exercise. Remarkably this pledge has lasted throughout January with the help of a mountain and road bike, and also RY19 XRP.

Living in a busy town, biking around traffic that seemingly wants to get as close to you as possible never appeals, so I’ve taken to driving to more appealing places to go for rides instead. It’s also where the Honda CR-V proves to be impressively useful, too.

While I’ve been impressed with our long-termers load-lugging ability in the past, I hadn’t realised just how vast its boot was. While the Honda is a mid-size SUV, it seems to have the space of larger models, with a completely flat floor and a large 1,756 litres to play with, it can fit a bike in without even needing to release the front wheel. This means the bike can lay completely flat – making it ridiculously easy to load it in and take it out again.

With the help of a £10 Homebase blanket for the bikes to sit on, it also saves any of the plastic in the boot getting scuffed, as well as avoiding the need to hoover the boot after each and every ride.

Being a creature of habit I’ve taken to the deep south’s New Forest for the road biking (it’s largely flat, quiet and very picturesque) and near Arundel, West Sussex, for the mountain biking.

Given I live almost slap bang in the middle of the two places, it means the CR-V has spent plenty of time sat on the motorway recently – somewhere it excels. Both in terms of comfort, fuel economy and ease of driving – the latter being provided with the CR-V’s lengthy number of driver assistance features, with the excellent adaptive cruise control system and blind-spot monitoring proving to be particularly useful.

Spending plenty of time in the CR-V, admittedly largely on weekends, also has given further time to discover more kit on the model. While already being seriously impressed with what our top-spec EX version comes equipped with (a panoramic sunroof, a head-up display and a full leather interior being personal highlights) I’ve managed to discover even more features on it – a heated windscreen and heated rear seats being two of the latest surprises. The fact that you can discover kit fitted to the CR-V nearly six months after it first arrived on the fleet is a testament to just how well-equipped it comes.

Heated front seats and a heated steering wheel can also be a godsend after a cold ride out.

There are only a couple of things that get on my nerves about the CR-V. The first is the high-beam assist (HBA), something which I think is a truly pointless feature at the best of times, but the Honda’s seems to be especially infuriating. I usually try and remember to flick it off ‘auto’ lights when the HBA comes into action. But if I don’t, it seems to love blinding cyclists by sticking it on, which is something I’ve been on the receiving end of since taking up biking.

It’s not just cyclists it doesn’t seem to be able to pick up, either, as if you’re on a straighter piece of empty road but have a car ahead in the distance, the high beam assist is again put on – much to the annoyance of other motorists ahead. I find it a touch ironic, too, given that’s what HBA is meant to prevent.

The touchscreen also continues to be universally poor, and it’s best if you get your pre-sets sorted prior to setting off so that you don’t have to use it for the rest of the journey.

But these really are small inconveniences that don’t detract from what is an impeccably useful and spacious SUV, which is proving to be a great biking companion. While RY19 XRP is sadly departing back to Honda soon, I’m hoping my motivation to keep biking and exercising lives on a bit longer…