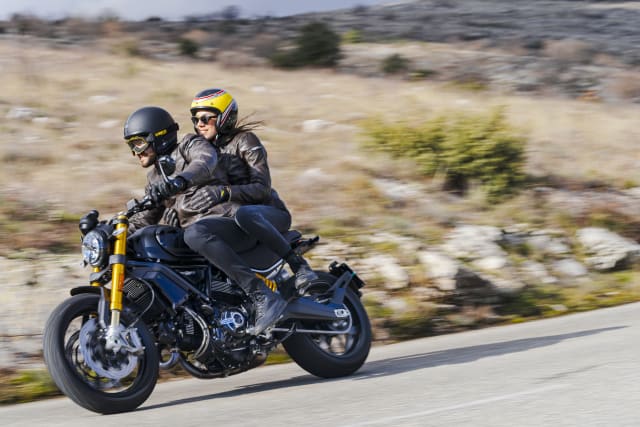 The pair are powered by the same air-cooled V-twin as before, but it now meets Euro5 emissions regulations. It pushes out the same 85bhp as the current Scrambler 1100, too. The Sport Pro uses performance Ohlins suspension while receiving lower handlebars and a matt black paintjob for an undercover look.

One of the most noticeable changes is a black ‘X’ which has been incorporated into the headlight, which is nod to the trend of the 1970s that saw riders tape over headlights when going racing.

The 1100 Pro and Sport Pro meet the 1100 Scrambler and 1100 Special in the range. Both of these new models benefit from a traction control system which have been tweaked for the pair. Cornering ABS has been included too, along with three riding modes – Active, Journey and City.

The pair also benefit from a new right-side dual tailpipe and low-slung plate holder, as well as a distinct new livery. ‘Café racer’-style rear view mirrors give it a more old-school look, too.

We expect the pair to be available to order form the end of March, and though prices have yet to be confirmed, we expect the Pro to weigh in at around £11,500 – with a slightly higher price tag accompanying the Sport Pro.